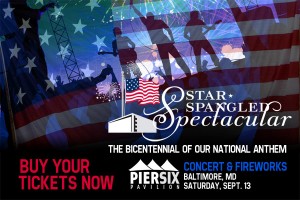 Star-Spangled Spectacular: Bicentennial of our National Anthem is a two-hour concert special at Pier Six Pavilion on September 15th that will also be live broadcast on THIRTEEN’S Great Performances series on PBS. The live television event is a celebration of the 200th anniversary of our National Anthem. The special will be hosted by actor, musician and author John Lithgow and will feature pop music artist Kristin Chenoweth, country group Little Big Town, American a cappella group Pentatonix, the Baltimore Symphony Orchestra and more to be announced soon. The patriotic special will feature a diverse line up of entertainers paying tribute to our nation’s ideals in a thrilling and inspiring concert.

Tickets   can be purchased online at piersixpavilion.com, over the phone by calling 410-244-1131, or in person by visiting Rams Head Live (Baltimore) or Rams Head on Stage (Annapolis) box offices. Doors open for onsite concert festivities at 5:00 p.m. with a special non-broadcast performance.

Posted in: Around Town, Music Monday