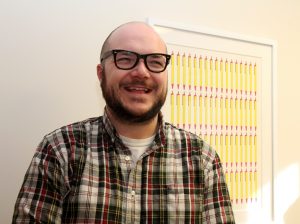 I’m not from Baltimore originally, I moved here in 2002 to go to MICA. I studied sculpture at MICA, but I did a lot of community-based things in neighborhoods and after school programs. I was really interested in learning about the city, because I wasn’t from here. Everything about different neighborhoods’ histories really excited me, so I did a lot off-campus learning about different communities. After I graduated from MICA in 2006, I started working at Parks & People Foundation as an Americorp, but ended up staying on there for 3 years. In that position I worked with a lot of community groups and Friends of Parks groups while doing my own artwork.  I started at BOPA in 2013 after taking a break from working full-time when we had our second son.  This position opened, and if I was going to go back to work, I was really excited to work for BOPA. Over that time I had been doing projects that were funded through BOPA and I did work for Artscape almost every year, so I was really excited to be a part of this side of it.

2. What is the Percent for Art Program and Public Art Commission? What types of work get created from both?

The traditional field of public art emerged around the idea of using or commissioning art to improve a specific place. We tend to track public art back to a movement in the 1950s-60s called the Percent for Art Movement. In the 50s-60s, buildings got more modern, and a lot of the adornment was taken away so the addition of art became a separate thing. So cities began creating Percent for Art Laws; Philadelphia was the first, and Baltimore was the second city to have such a law. The idea being, when a new project was built with public money—anything from a swimming pool to a park to a building—that the city should set aside 1% of that funding for art. The idea of including art is great, but someone has to figure out how to find and select artists, bring the artists on board in the middle of this construction project, and manage the project between the builders and the artists. That’s where the Public Art Commission and project managers come in. The Public Art Commission is appointed by the Mayor and oversees the spending of the money and approves the artists that get picked.  Myself and our staff act as the liaisons between the artists, the projects and the Public Art Commission. We write the calls for artists, find out what projects are coming up, try to preserve artworks that have been built before and have monthly meetings to present on the status of current projects and discuss upcoming opportunities.

3. How do Public Art and the Percent for Art Program fit into the larger mission of BOPA to make Baltimore a more vibrant and creative city?

In the guidelines for the Percent for Art program, it states that the mission of putting art in public places is to enhance the lives of citizens and viewers, and to allow opportunities for artists to use as much creativity and imagination as they can to enhance the built environment. When this works out it’s really beautiful, and artists can really enhance the quality of urban life, and add a little magic to someone’s daily experience.  We just did a project for the Waverly Library, after the library got completely renovated. Ebon Heath made a beautiful relief behind the circulation desk that comes off of the wall in different layers and it’s all composed out of words that were collected from the community. So every time someone comes in there they can look for their name or their words, its mesmerizing and you can get lost in it. When the Canton Library was renovated, the artist there, Julie Girardini created boat sculptures to reference how close Canton is to the water’s edge.  One of the sculptures contains little pages of images, like a book within the sculpture. When you start turning the pages you realize all the images are historical pictures from the Canton area and the ship building history of Baltimore. In both cases these artworks are not just decoration, they spark your imagination, and also remind you to think of the bigger picture of where you are.

4. What is the process for commissioning a new piece of public art?

Most Percent-for-Art projects start with a Request for Qualifications. We are usually not asking for proposals or ideas, because that would require the artist to provide their ideas for free and on Percent-for-Art Calls we want them to develop their concepts once they have the commission. So the Public Art Commission looks at the applications and selects an artist, the artist develops concepts and again presents their concepts to the Public Art Commission.  When the concepts are approved they start designing all the details of the project. Throughout the process, they have to come back and talk through elements of the project with the Commission from design details to material choices. Then, they install the work. When the work is completed, it is under warrantee for a year with the artists, meaning that it’s their responsibility if it breaks or falls down. After that, it’s part of the city’s collection and it’s up to us to maintain it with the owing agency.

5. What are some of the biggest challenges you face working with public art projects?

One of our biggest challenges is conveying to some of the partners we work with, what the benefit of public art can be. It’s easy to say that art would either slow down a project or detract from it, when it would actually benefit it a lot. The artwork we are adding to these public locations is not just decoration or an add-on. They are sometimes integrated into the function of the space or location, in other ways they go beyond just filling the wall, and speak to the history of the future desires of that community.

Any challenges with selecting the artists?

The hardest part with selecting artists is seeing so many talented artists and not getting to select them all. The selection process and seeing them come up with the ideas is the most fun. I love the artist selection process because it brings together people from the neighborhood, people from the facility and people from the Public Art Commission. So you get to talk to different folks and learn what they value and what’s important to them. The stories that come out of that are really interesting and I like getting to know the people and the neighborhoods throughout that process. That larger group narrows down the applicants from anywhere from 50 applicants to four to seven recommendations. So that group has done so much work to make sure that their recommendation gets a fair chance. Then, the smaller group goes to the Public Art Commission and they decide the final selection. It’s a very democratic process, it feels like you’ve had this primary and then it goes to the Electoral College or something like that.

So we are about to have the unveiling of the Waverly library art project tomorrow (Friday). I’ve been here three years and that’s the second full project I’ve seen from beginning to end. I think the biggest reward is having someone put their art in and watching them hand off their project. Also seeing the pride in those folks that helped select it and helped work with it, and now they’re like, “I helped get that there.”

If you and your family live in the same place for a long time, you see the environment change. Even though artwork is such a small piece of that, it’s really been amazing to be in Baltimore for 14 going on 15 years, have a family here and being able to go “When I moved here that mural was different, but we restored that 3 years ago, and now it looks like this.”

There are so many public sculptures that fall outside of the public art program but still make the city really interesting. You can study the history of those objects and learn a lot about the city. Like last year, we had a special commission to review the Confederate Monuments in the city. I learned so much about how they were made and the history of Baltimore that I thought I knew, but didn’t really know.