In the past month the foundations were laid for one of the main projects of Transit – Creative Placemaking with Europe in Baltimore: the European Artists’ Residency. One of the overarching goals of Transit is bringing together local and European artists, and community groups to explore together how three selected transit hubs in the three Arts & Entertainment (A&E) Districts of Baltimore are used by the public. Based on the outcomes of this cooperation the invited artists will create some artwork that will be installed in each transit hub.
The proposal deadline for the EU artists’ Transit projects was September 6. Proposals from Austria, Spain and the United Kingdom, were submitted and are currently being evaluated by a jury of representatives of EUNIC D.C., the Baltimore Office of Promotion & The Arts, and the three A&E Districts on the following criteria:
• Artist’s qualifications as demonstrated by past works and professional track record;
• Quality of the proposal based on artistic excellence and innovative approach, viability of the plans and suitability to the brief;
• Demonstrated experience of delivering work in the public realm.The Bromo Tower A&E District, for example, has formed an Arts Advisory Committee of district artists and stakeholders to review the submitted artists’ proposals. ArtPlace funds will be applied towards the implementation of the concepts developed by the artists in residence.The Highland Town A&E District is currently seeking additional funds to hire a Baltimore artist to work with the European artist. The selected European artists that will come to Baltimore for a 6-week-long residency from January to June 2014 will be notified in fall 2013.

The biggest development for the Transit project in the Bromo Tower A&E District in the month of September was The Future of the Howard Street Corridor panel discussion on September 17 at the Zion Church of the City of Baltimore. The panel gathered city development leaders and IBA Hamburg representatives, and HafenCity project experts to discuss the ways of improving the Howard Street Corridor. In the process, the panel used the successes (and failures) of Hamburg’s HafenCity project as a reference point. Upon completion, HafenCity, Europe’s largest inner-city development project, is expected to add 12,000 residents, along with restaurants and bars, cultural and leisure amenities, retail facilities, parks, plazas and promenades. HafenCity has set new standards for ecological sustainability and mixed use development in an urban area. HafenCity project leaders first conducted a walking tour of Howard Street, and participated then in a panel discussion with their Baltimore development counterparts. For more information about this panel discussion, visit the Transit website!

Earlier this summer Highlandtown A&E District held three well attended community workshops to gather ideas from community members for the Creative Placemaking projects around its three transit stops. These recommendations will be implemented in the form of public art, lighting and seating. Soon two calls for artists will be disseminated: one for sculptural public seating near the transit stop Conkling St. & Eastern Ave. and the second for a mural next to a transit stop at Eastern Ave. & East Ave. A Transit Steering Committee is currently being developed in the Highlandtown A&E District that intends to include Highland town residents from many backgrounds in the design process of the Transit project: refugee artists from the Baltimore Resettlement Center, immigrants from Highlandtown’s global community as well as teens and adults of many races, ethnicities and ages. Also, the Creative Alliance is working on new European programming – to further deepen the transatlantic dialogue. 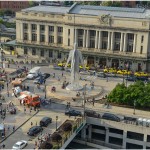 Station North A&E, Inc. (SNAE) has taken on the role of activating the plaza of Penn Station, Baltimore’s primary transportation node. The plaza favors automobiles, and is uninviting to pedestrians. Through tactical installations, placement of street furniture, and artistic activation, SNAE is attempting to use its ArtPlace funding and other funding to reengage the public at Penn Station plaza. Several events have been held at the plaza, which have drawn thousands of participants. Recent plaza updates include: 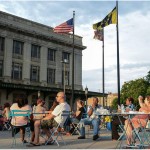 • Baltimore City began providing free public WIFI in Penn Station plaza during August 2013;
• Thanks to a partnership between the Mayor’s Office, the Parking Authority, Amtrak, and SNAE, with funding provided by the Robert W. Deutsch Foundation, Penn Station Plaza now features attractive tables, chairs, and umbrellas;
• Interboro Partners, a Brooklyn-based planning and design firm, ran a charette to solicit ideas for their public installation at Penn Station plaza, scheduled to be installed fall 2013;
• On September 20th, SNAE will partner with the Gathering and Baltimore Innovation Week to present an evening of food trucks, music, drinks, and adult games at the Plaza.
(Above two photos courtesy of Theresa Keil) 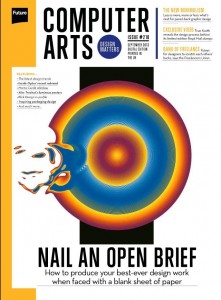 Another achievement is that the Transit logo designed by the Spanish graphic designer Marta Cerdà has received great appreciation  by the Computer Arts magazine, which featured it on its September cover and in a several pages long interview with Cerdà. Computer Arts is one of the most important international magazines on graphic design.

One important thing one should always keep in mind is involving the community. It does not only help bringing together many different perspectives around a given topic, but also increases the acceptance of projects and planned city developments in a neighborhood. The updates, especially on the Bromo Tower and Highlandtown A&E Districts, embody this effort and are good examples of many different stakeholders with different backgrounds coming together to learn from each other and advance similar goals, such as the promotion and development of arts and the economic development in a district.