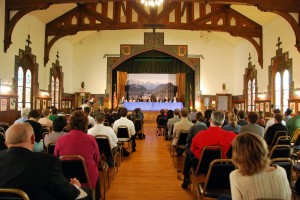 Mid-September the Bromo Tower A&E District hosted the panel discussion The Future of the Howard Street Corridor. On September 17, 2013 city development leaders from Baltimore and representatives from HafenCity and IBA Hamburg (Germany) met at the Zion Church of the City of Baltimore to discuss ways of improving the Howard Street corridor. Prior to this discussion, the exhibit Building the City Anew: Imagining Tomorrow’s Hamburg, focusing on the redevelopment of two neglected neighborhoods in the city of Hamburg, opened at the University of Maryland School of Architecture on September 16, 2013 and was displayed through October 7, 2013. 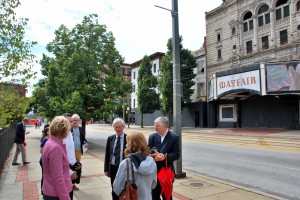 Moreover, one day before the panel discussion the German urban development delegation was guided through the Bromo Tower A&E District to get familiar with the infrastructure of Howard Street, in particular its transportation hubs and cultural institutions. The gleaned insights from this tour gave valuable input for the discussion on Howard Street the following day on how to regenerate the Howard Street as a transit corridor, by means of art and urban design initiatives. After a brief presentation of HafenCity and IBA Hamburg the forum began amongst the invited panelists and was followed by a short Q&A. The representatives from the two city government agencies in Hamburg made the following recommendations:

The video documentation of this panel discussion can be found here. Visit the TRANSIT – Europe in Baltimore website for more detailed information on this topic. The exhibit Building the City Anew: Imagining Tomorrow’s Hamburg will open on November 14, 2013 at the UDC CAUSES in Washington, D.C. and can be seen until December 6, 2013.
The Bromo Tower A&E also announced the hiring of the District’s first director, Priya Bhayana. She will be in charge of advancing and promoting the interests of arts venues, retailers, and other key stakeholders within this district. More on that announcement is here.

After three successful Creative Placemaking workshops with residents, the Highlandtown A&E District is currently in the project planning phase and negotiates contracts with artists and contractors to implement the many projects recommended at the workshops. These workshops would not have gone so smoothly without the help of its many talented volunteers, including the Highlandtown Main Street Design Committee. 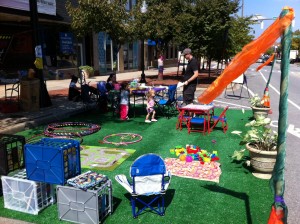 Along with the planning these projects, Highlandtown held two outdoor parties and built a temporary outdoor park to keep the good humor and spirit. On September 6 and October 4, 2013 Highlandtown brought the party in the Creative Alliance outside with performances from Charm City Roller Girls, stilt walkers and light projections. Also, bus stops were transformed into a fun seating area with plants, lights, Adirondack chairs, and bistro tables. Later on in September, the A&E District partnered with local business. On September 20, they partnered with the local business Baltimore Threadquarters to build a community park in two parking spaces as part of Park(ing) Day, a national event where citizens transform parking spaces into temporary parks. The day was capped off with an outdoor BBQ and music. Since the project TRANSIT was kicked-off, three new businesses have opened along Conkling Plaza, one of Highlandtown’s targeted public spaces. They were working with these merchants on Placemaking projects, like the gallery tour in October which displayed artwork from local artists not only in the district’s galleries, but also in these recently opened businesses.

On September 29 100 quilts were displayed at Penn Station Plaza in the Station North A&E District as a part of the the Monument Picnic, organized by FORCE. Prior to the event, FORCE and CONGREGATE partnered to host quilt making workshops with congregation members at the Spiritual Empowerment Center as a way to provide community support for survivors of rape and abuse. As the first leg of its historic project, FORCE hosted the picnic at Baltimore’s Penn Station Plaza, allowing visitors to interact with the quilts, read survivors stories and join in a community of support. 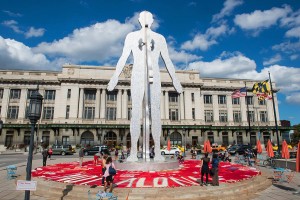 The event generated positive press for the project and Penn Station Plaza, including an article in the Baltimore Times, was listed as a Top 10 Event to attend by HUGECITY Baltimore, and generated many social media posts.
This event was a program of Congregate: Art+Faith+Community, an exhibition and series of programs that creates shared experiences for faith-based congregations and artistic communities within the Station North Arts and Entertainment District. The exhibition was curated by the Maryland Institute College of Art (MICA) Curatorial Practice MFA class of 2014. The event was also made possible by Station North Arts & Entertainment District.

The insight gleaned from the panel discussion on The Future of the Howard Street Corridor demonstrates the importance of learning from other cities, in particular from countries other than the US, and their best practices when it comes to urban revitalizing strategies and initiatives. However, the question is to which extent are cities of different countries, with different forms of municipal government comparable and its strategies applicable to each other?