This is the fifth in a series of interviews with each of the Sondheim Award Semifinalists. Finalists will be announced in mid-April, and will be on exhibit at the Walters Art Museum June 21 to August 17; those not selected as finalists with be exhibited at the Decker, Meyerhoff and Pinkard Galleries at MICA  July 17 to August 3, 2014. 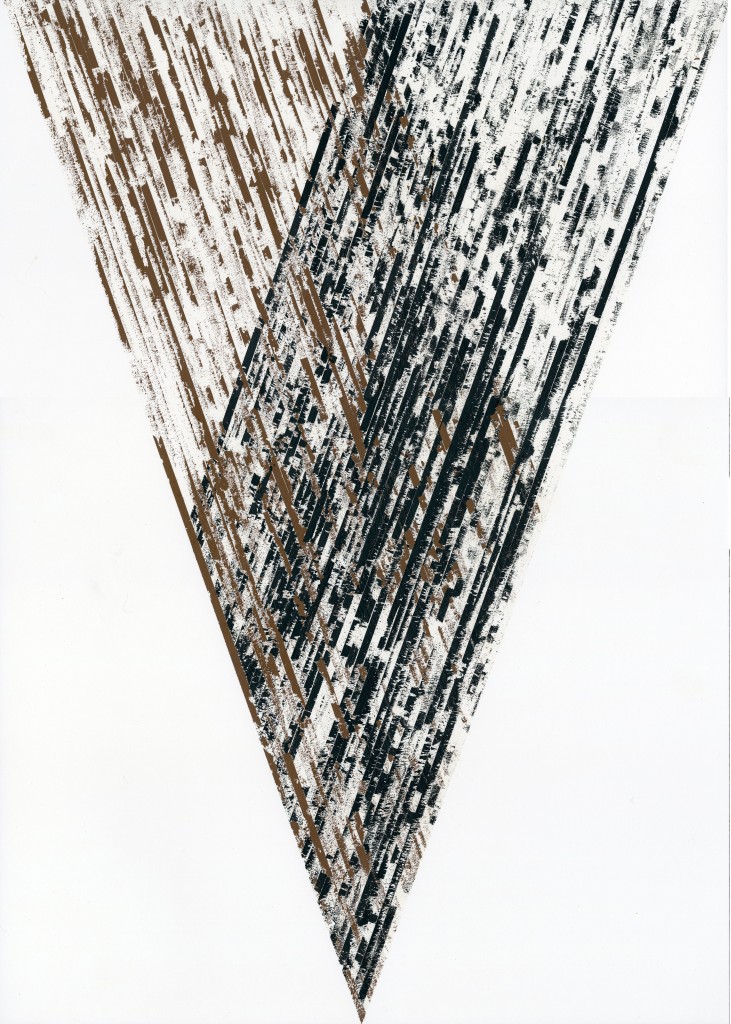 Current favorite artists or artwork: Anoka Faruquee (moiré pattern paintings are very exciting), Peter Kubelka (the installation of his film for Arnulf Rainer really was an inspiration for this work) and Scott Short’s weird xerox paintings at the moment.  But I could easily add William Anastasi or Jennie C. Jones to the list.

What is your day job? I am an Assistant Professor in the Art Department at Stevenson University, who coordinates the Foundations Program.

How do you manage balancing work with studio time with your life? By not sleeping and keeping a calendar.

How would you describe your work, and your studio practice? I would describe my work as primarily concerned with the relationship between sound and vision. This body of work is really about this found obsolescent object, the commercial cassette tape.  It is slightly anachronistic in the west, appearing in some subcultures like experimental noise or black metal, but is more widely in use in certain countries in Africa – if you haven’t bookmarked Awesome Tapes from Africa you must (http://www.awesometapes.com/).  My studio practice is more of a laboratory where I try out a lot of ideas, I tend to generate sets of formal explorations and then edit them down.  This body of work came from repairing a Roland Space Echo, an original tape delay, and realizing how beautiful the surface of the tape was. 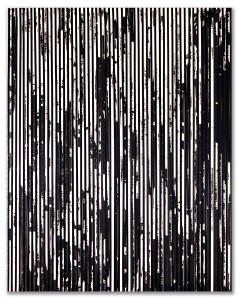 What part of artmaking to you like or enjoy the most? The least?  The part I enjoy the most is the focus.  It is probably the closest I can get to meditating with my hectic life.  The least, is all the applications, deadlines, etc. and trying to get the work out there.  I always hate that feeling that I lost good studio time to just push paper.  But it is part of the beast.

What research do you do for your art practice? I listen a lot.  Right now I listen to a lot of records that used magnetic tape as a composition element so a lot of Musique Concrete and Acousmatic works, Eliane Radigue, Ivo Malec to David Tudor or early Steve Reich.  I also look at a lot of artists who use hard edge abstraction like Ellsworth Kelley or Frederick Hammersley.  Just try and pay attention and be sensitive to what people have done before you.

What books have you read lately you would recommend? I make a lot of art zines and have really been intrigued by The Photo Book: A History Vol 1-3 by Martin Parr and Gerry Badger.  It’s really comprehensive.

Movies? Derek Jarman’s “Blue” – I love the monochromatic picture, and the poetic intimate story.  I think it is a masterpiece by relying on audio over image, “Our life will pass like traces of a cloud.”

Television? “True Detective” (HBO), Kind of wound the audience up into a quasi-mythic possible Lovecraftian furor at first but ended like some nightmare SVU by way of David Lynch – with some excellent acting.

Music? Outside of the reissues Editions Mego is doing with the GRM studio of people like Luc Ferrari and Bernard Parmegiani, I am really into groups like Rainer Veil’s last LP on Modern Love, the recent collaboration between Sunn O))) and Ulver, the recent Kangding Ray “Solens Arc” and the LP Kevin Drumm just did “Crowded” is so harsh and intense. 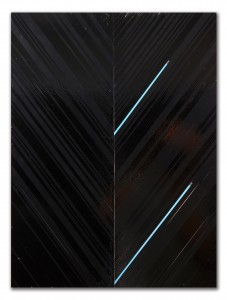 Do you ever get in creative dry spells, and if so, how do you get out of them? I did when I was younger.  But now not really.  I just work through them, I just keep trying ideas and making failures.  For me art has this way of solving itself, I’ll go and make some music or read, or do research about a material and then I’ll return to something.  Just because it gets made doesn’t mean it has to be shown.

How do you challenge yourself in your work? Not to be afraid to make a wrong move, just make it and step back and be honest.  Editing is so important, so often its so easy to not know what is essential to the idea or experience.  So I always start asking what is necessary and what isn’t?  The other thing is to find people whose vision you respect when it gets tricky and who know more than you do.  And then actually listen to them.

What is your dream project? I really am interested in experiences, so one of my dream projects is to combine audio installations using analog tape players extended across large architectural spaces.  To use multiple reel to reel tape players to generate delays of original audio.  I would combine this with large cassette tape collages, to allow a slip between the media on a larger scale and make something immersive and push toward the sublime.