This is the nineteenth in a series of interviews with each of the Sondheim Award Semifinalists. Finalists have been announced, and will be on exhibit at the Walters Art Museum June 21 to August 17; those not selected as finalists with be exhibited at the Decker, Meyerhoff and Pinkard Galleries at MICA  July 17 to August 3, 2014. 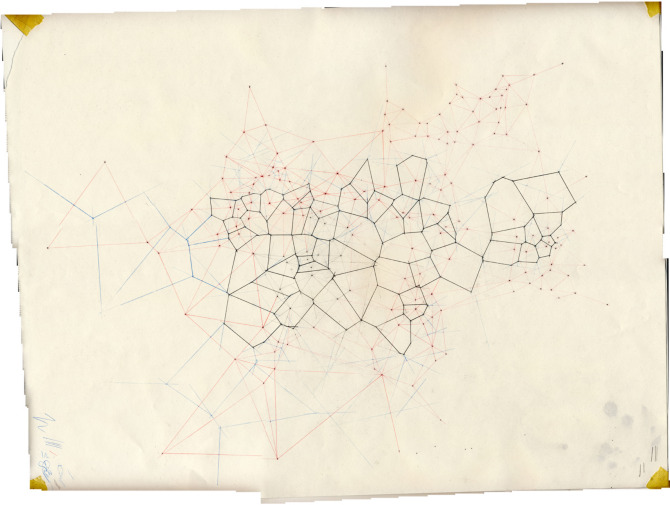 Current favorite artists or artwork: too many Baltimore artists to mention, but I get so much out of the way that this city works. There are many times where I’ve met someone and enjoyed hanging out with them, and then I later find out they happen to be making some of my favorite stuff. I love that people here are so accessible and open about talking about what they do. As someone who is coming towards art from a background in design, I appreciate that willingness to just dialogue, and I have learned a lot from that.

What is your day job? How do you manage balancing work with studio time with your life? I teach architectural design in the graduate program at Morgan State’s School of Architecture and Planning, where I am lucky to learn from my students and my colleagues every day. Right now, I find myself in this weird place where suddenly I have three desks: one at Morgan where I can do research and teaching, one at my home where I can do more architectural design and writing, and one at my studio where I do drawing and small sculpture. It’s not always that clear cut where one ends and the others begin, but this is new to me, as up until December I had done art, design, research, and writing all at the same home studio. I’m still figuring it out, but it works so far.

How would you describe your work, and your studio practice? In my work I’ve become interested in setting up systems, and then working within them. When I was in grad school I took a course on Processing, which is a computer language invented by some people at MIT that bridges the gap between abstract art and software code. What I liked about it was the way you could build the rules of a little pocket world, and then see what it could do, and then pop back out and tweak the rules some more. Somehow, even though it’s totally deterministic, you can still be surprised by effects you haven’t expected, and then use those effects in decisive ways. It’s similar to the way architects work, setting up constraints, and then working with those constraints to see what’s possible. I didn’t have the patience to work this way in front of a keyboard, though. When I started drawing again, I wanted to use that same kind of thinking at the drafting table: start with a set of clear rules, and run the drawing like an experiment, then change some of the rules, and run the drawing again, with different purpose and intention. For some reason, I’d rather spend the hours hunched over a drawing board, rather than in a desk chair at a monitor. It’s not an aversion to technology, maybe it’s more of a posture thing … 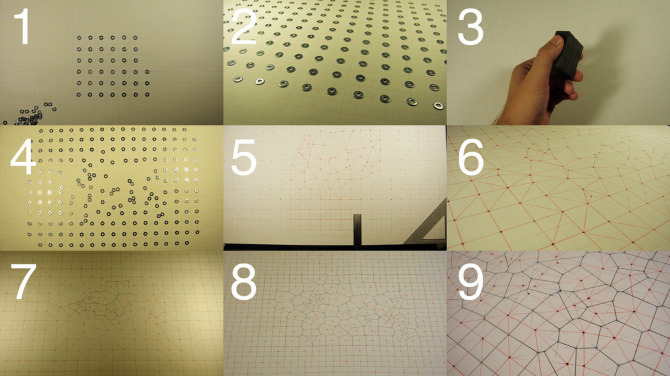 What part of artmaking to you like or enjoy the most? The least? I love getting absorbed in the process, spending the actual real time with it, thinking with it and interacting with it. The part I’m bad at is remembering that at the end, it’s not just process, the artifact itself is the thing, and that it should be treated in a way that’s careful and precious. It’s probably another hangover from thinking like an architect, where you make drawings, but the drawings aren’t the thing, they’re the means to an end, which is the thing. Me and my partner, Marian Glebes, talk about this a lot, she has a deep background in the fine arts, and I’m learning a lot about other ways of thinking from her. I’m fascinated by the differences between art and design. Among other things, I’m a terrible art handler.

What research do you do for your art practice? I like to find material on geometry, ornamentation, systems thinking, networks and diagramming, cartography … it’s about staying on the hunt for new methods and new formal systems, and those can really come from anywhere, at any scale, in the arts, or the sciences. As a designer I’m also interested in space science, it’s such a weird intersection of technical organization and projective aesthetics.

What books have you read lately you would recommend? Movies? Television? Music? This is a topic dear to my heart, and one that I could go on and on about, but I’ll spare you. Some of my favorite books are science fiction, I’ve been reading one or two sci-fi books a week, lately. I’ll only mention a fantastic novella I can’t get out of my head, written by two Russian brothers in the 1970s, called ‘Roadside Picnic’. It’s a bizarre story about postindustrial landscape and the disruptive potential of strange unknowable technology. For movies, I absolutely love this old Miyazaki anime from the mid 80s called Nausicaä of the Valley of the Wind, which, now that I think of it, has similar themes to ‘Roadside Picnic’. On TV I’ve been watching a lot of nature documentaries, I’m loving this new David Attenborough series on mammals. Music is another one I could go on about, some of my favorite stuff is from Baltimore. I play mostly records in the studio, so it’s awesome that so many Baltimore musicians are releasing on vinyl. On heavy rotation is Ponytail, WZT Hearts, Moss of Aura, and Future Islands. 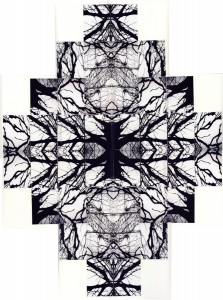 Do you ever get in creative dry spells, and if so, how do you get out of them? I’m lucky to have opportunities to switch channels – if drawing isn’t working out for a bit, I refocus on writing and research, if architectural design hits a block, I can find new inspiration with my students. It goes around and comes back again.

How do you challenge yourself in your work? With drawing, the challenge is there every day. Blank paper is scary, and there are some times where I’ll avoid it for months! I’m trying to practice closure right now, executing a series and then ending it. It’s forcing me to keep going forwards, instead of dwelling on old work and old methods.

What is your dream project? I’d like to get more chances to get out of the studio and do some more drawing in the real world, to work more with water, lasers, magnets, and dirt. Drawing has this history that goes back to scratching in the ground with a stick, I think getting back up to full scale, and branching out to other technical means is the future of drawing.