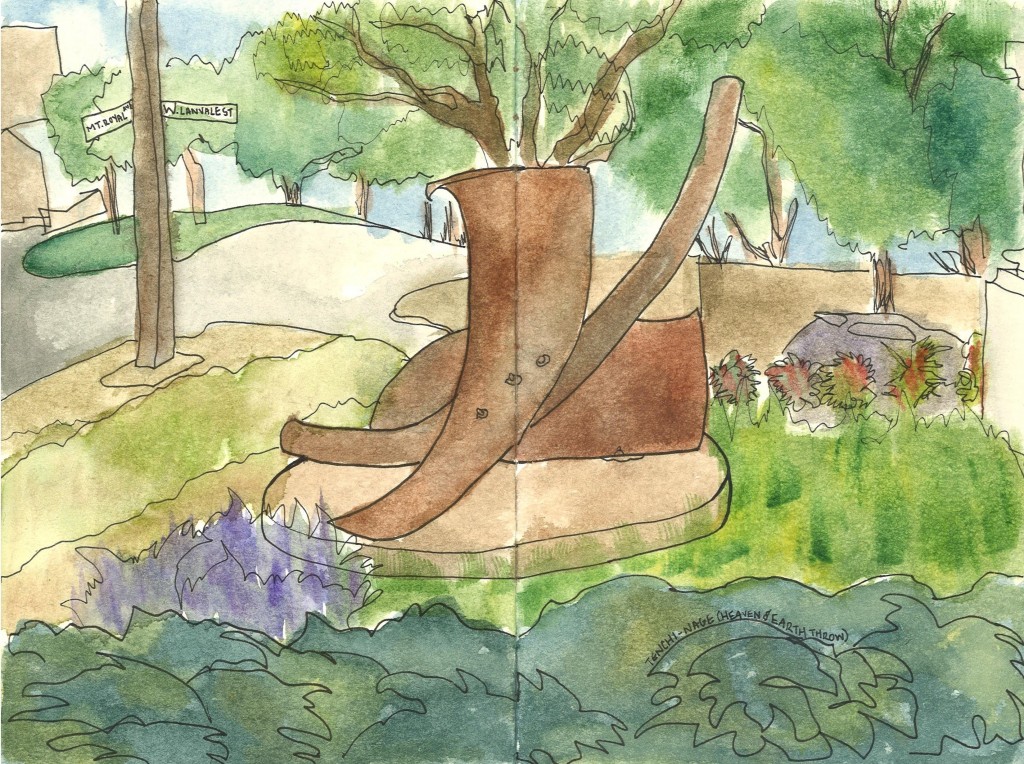 Fifteen sculptors from across the country who were alumni of the Rinehart School of Sculpture at the Maryland Institute College of Art (MICA) were invited to create new works of art for an Artscpae exhibition planned by the city for the summer of 1996 to mark the centennial of the founding of that graduate program. This  sculpture by Rodney Carroll(’83) was one of the pieces commissioned for that exhibition, Celebrating Rinehart, and is one of five that has remained on site.

Carroll’s choice of this site determined the scale of this piece. Most of Carroll’s sculptures of the time had a verticality that would not have worked in front of MICA’s Main Building on Mount Royal Avenue. So, Carroll began a new series of sculptures that would deal with the dynamic relationship between teo people and two elements. For inspiration he turned to Aikido, a Japancese martial art that focuses on using one’s own energy to gain control of an opponent in order to throw that opponent away from oneself, but to never permaently harm him or her. Tenchi Nage is one such throw. Literally translated as ” Heaven and Earth Throw.” It was so named because during the throw, one hand travels upward toward the heavens while the other hand travels downward toward the earth.

Here the  arcing element in the front represents the figure that is lifting and throwing his opponent, who is represented by the figure behind it. The energy exerted between the two elements, or opponents, is represented by the central curving tubular form. The three elements are bolted together and mounted on a circular concrete base. When the piece was first installed, the uncoated steel had a silver color, which today has weathered to a rich reddish brown.

Want to know more about Baltimore Public Art? Pick up the book Outdoor Sculpture in Baltimore: A Historical Guide to Public Art in the Monumental City by Cindy Kelly.
Posted in: Around Town, Public Art