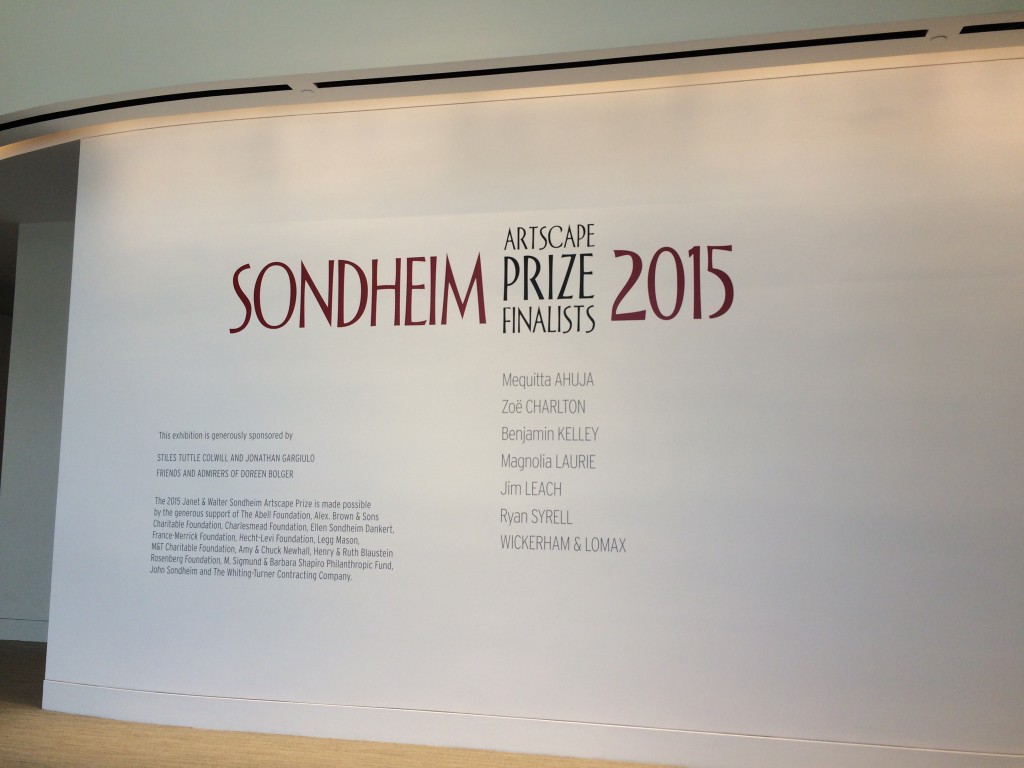 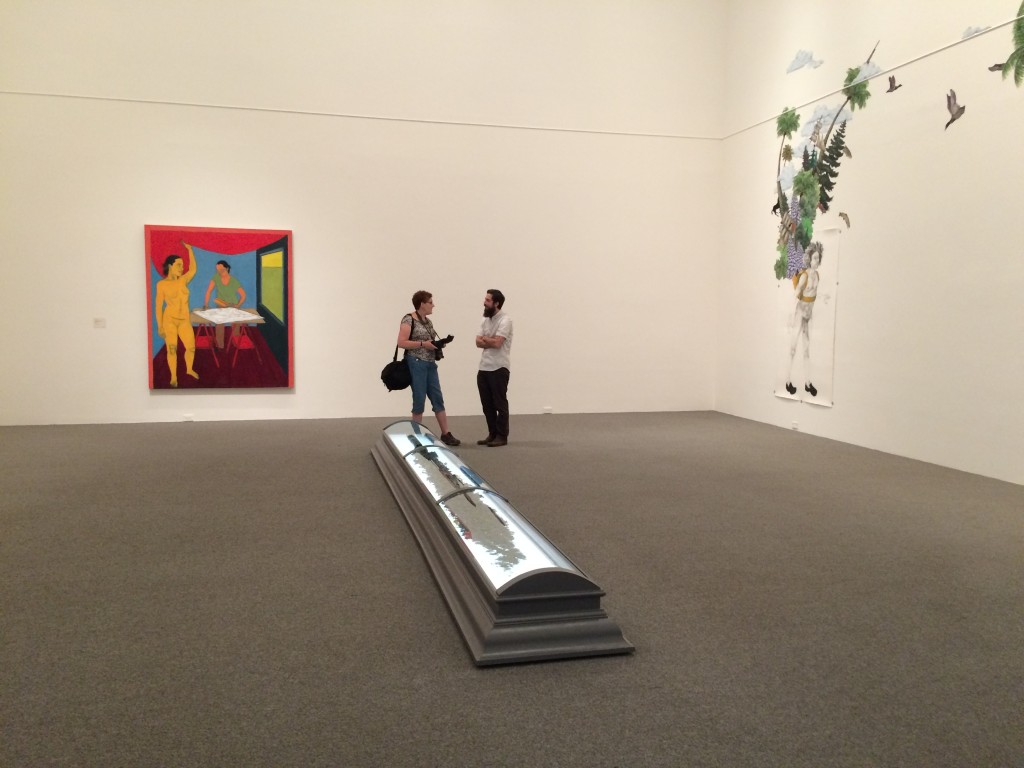 On Tuesday, June 23rd, the Baltimore Museum of Art hosted a Press Preview for the Sondheim Artscape Prize Finalists’ Exhibition, which is on view June 24th to August 9th, 2015. I was lucky enough to attend the Press Preview and get a sneak peak at the exhibition before it opened up to the public, and I am beyond impressed with the tremendous group of artists represented in this exhibition! Click through to see more photos and read my thoughts on the works included in this show. 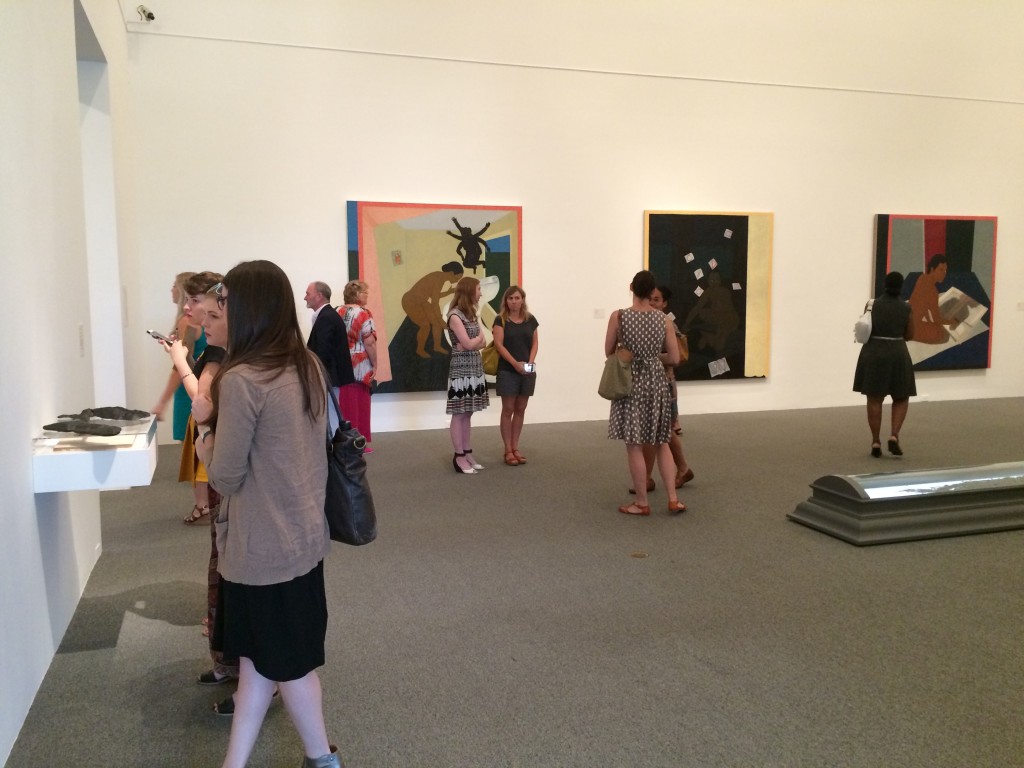 This exhibition features recent works by the 8 artists who have been named finalists for this year’s Sondheim Artscape Prize: Mequitta Ahuja, Zoe Charlton, Benjamin Kelley, Magnolia Laurie, Jim Leach, Ryan Syrell, and the duo, Wickerham & Lomax. The Janet & Walter Sondheim Artscape Prize is given annually to a visual artist working in the Baltimore area. The winner is given $25,000 to help support their artistic practice and help them develop as an artist. The winner of the prize will be announced on July 11th at 7:00pm in the BMA’s Joseph and Rebecca Meyerhoff Auditorium – a highly anticipated event! But before that announcement comes along, let me acquaint you with this year’s outstanding group of finalists. 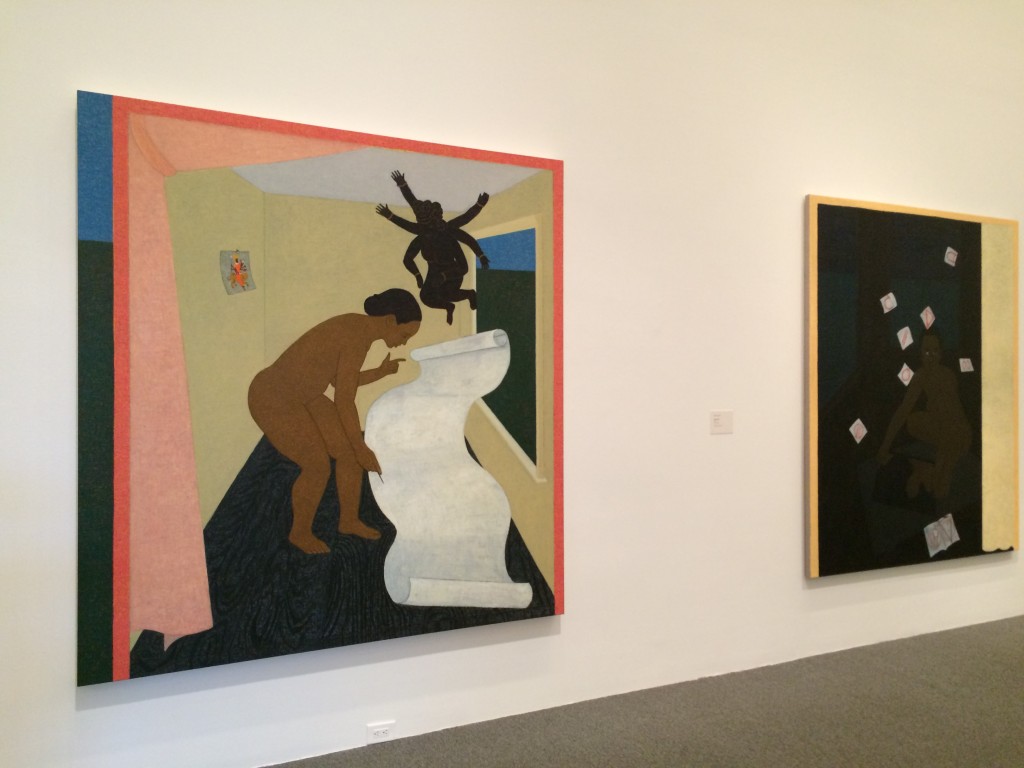 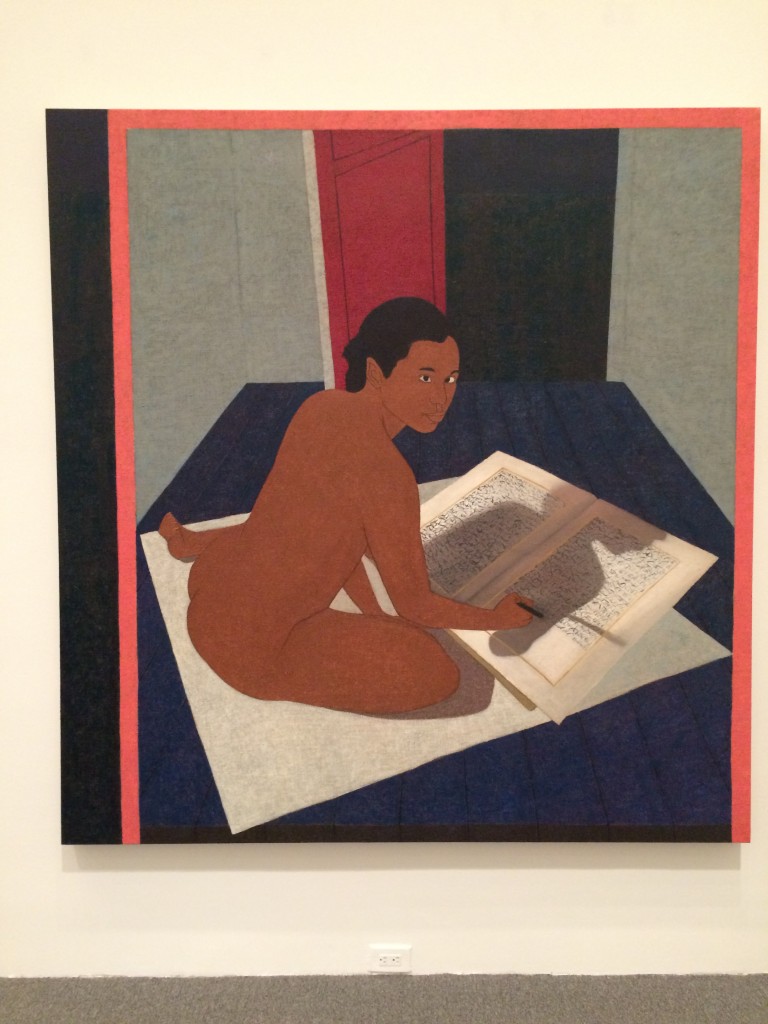 Mequitta Ahuja’s paintings are her means of confronting the history of painting. In many of her works she re-imagines Western art history, which is largely defined and shaped through the eyes of white males, to be more inclusive of a more diverse representation of artists and subject matter. She weaves her heritage, her spirituality, and her identity into her imagery in order to re-define the archetypes of painting. I personally appreciate the rich texture and her bold, unapologetic mark found throughout the series of paintings on display in this exhibition. As an artist myself, I particularly enjoyed the fact that she is showing a work-in-progress, “The Artist and Her Model (Unfinished)”, which gives a unique perspective into her process. 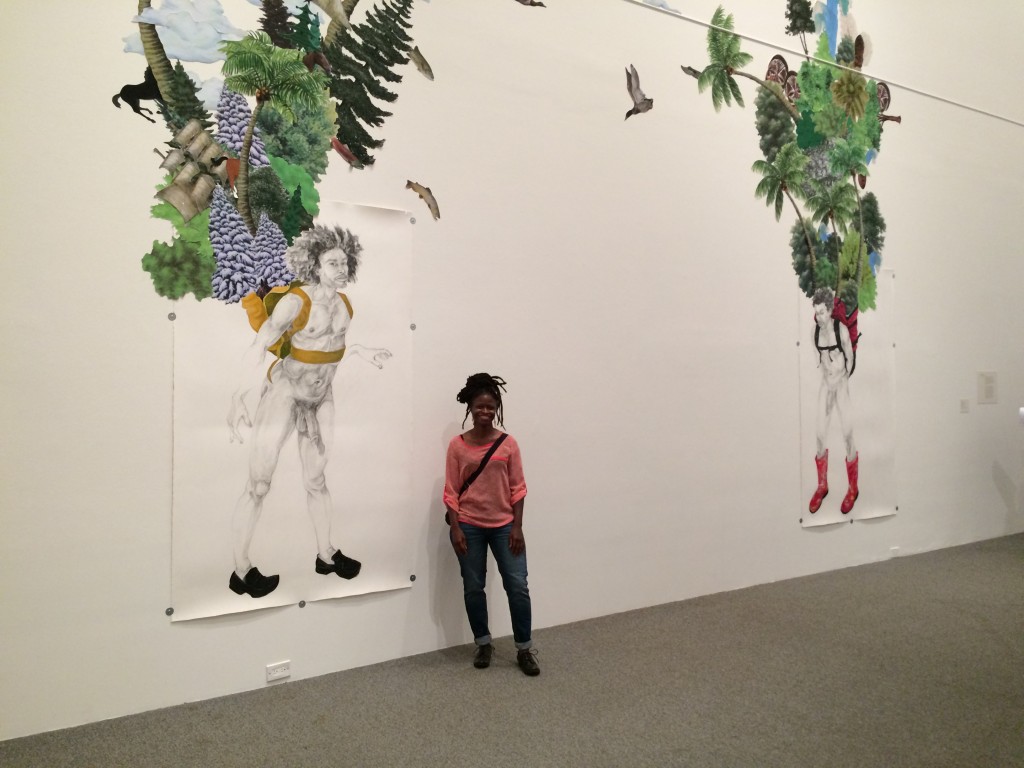 Zoe Charlton’s larger-than-life-size drawing and collage, “Companion, Constant,” depicts Kalulu, the African servant of a British explorer. Although Kalulu died young, Charlton uses this history as a jumping-off point for an imagined, mature version of Kalulu, who has grown strong and autonomous, and who appears to be departing on a journey. Her works, which often depict nude bodes, both male and female, black and white, confront the viewer with their own personal baggage that shapes the way we see human bodies in a variety of roles. Zoe’s installation may make you uncomfortable – but it will also cause you to question that discomfort. 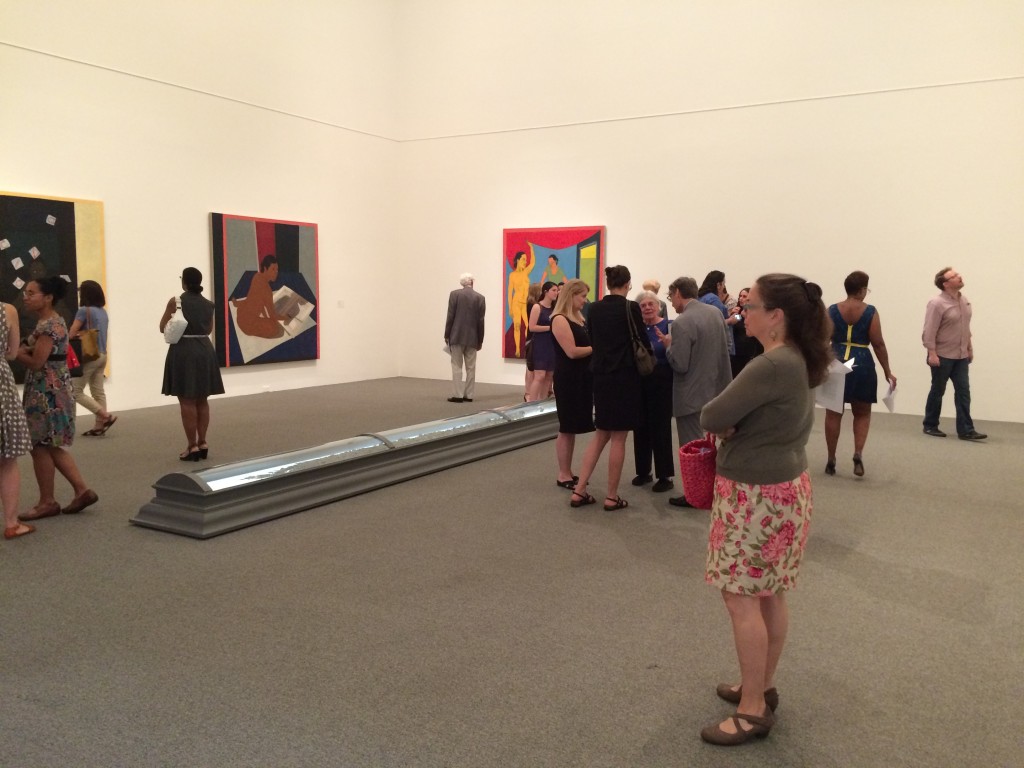 On the floor and along the wall of the first gallery space, you will find Benjamin Kelley’s sculptures, one massive in scale and one small enough to fit on a shelf-pedestal. Ben reclaims artifacts from the industrial and natural worlds, fashioning them into sculptures that suggest humanity’s destructive interventions into the environment. One definitely gets that feeling from “The Steward,” Ben’s installation of a deep earth core sample obtained by the JOIDES Resolution (Joint Oceanographic Institutions for Deep Earth Sampling) from the Gulf of Alaska in 2013. I like that Ben Kelley’s work brings what might seem far away or distant from the Art Gallery setting into the forefront of viewer’s minds – not just by portraying his ideas through a secondary medium, such as drawing or photography, but by physically dropping these objects into the gallery space. Because of this, when I’m approaching Ben’s pieces, I feel as though I’ve been transported into a different world. 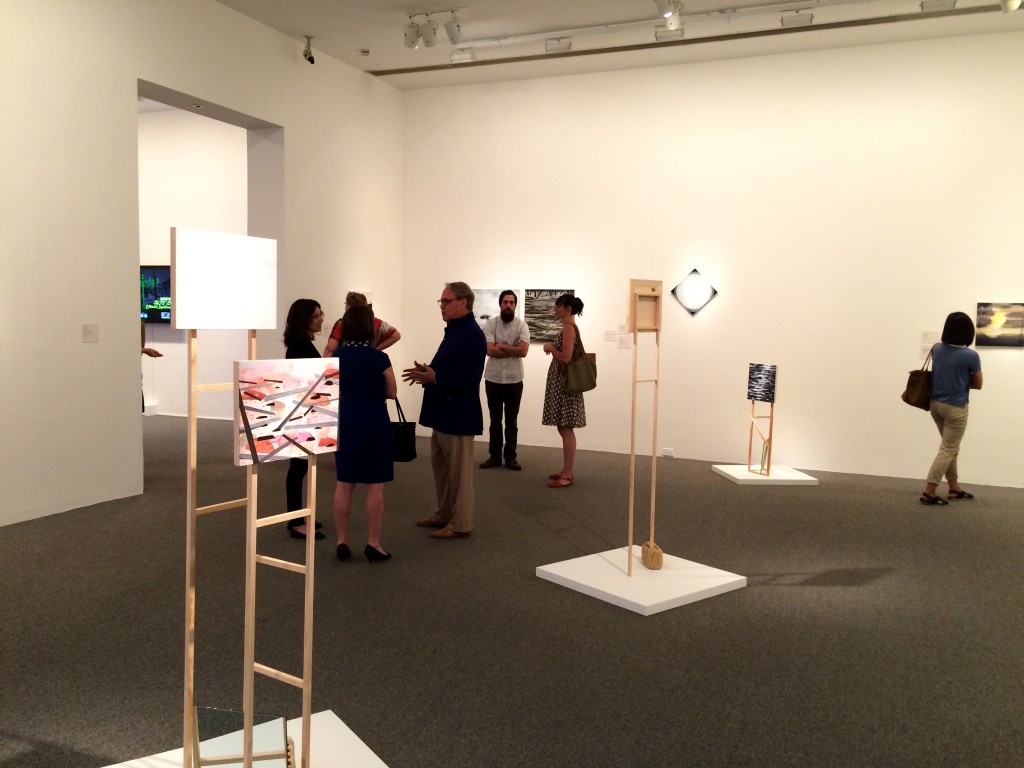 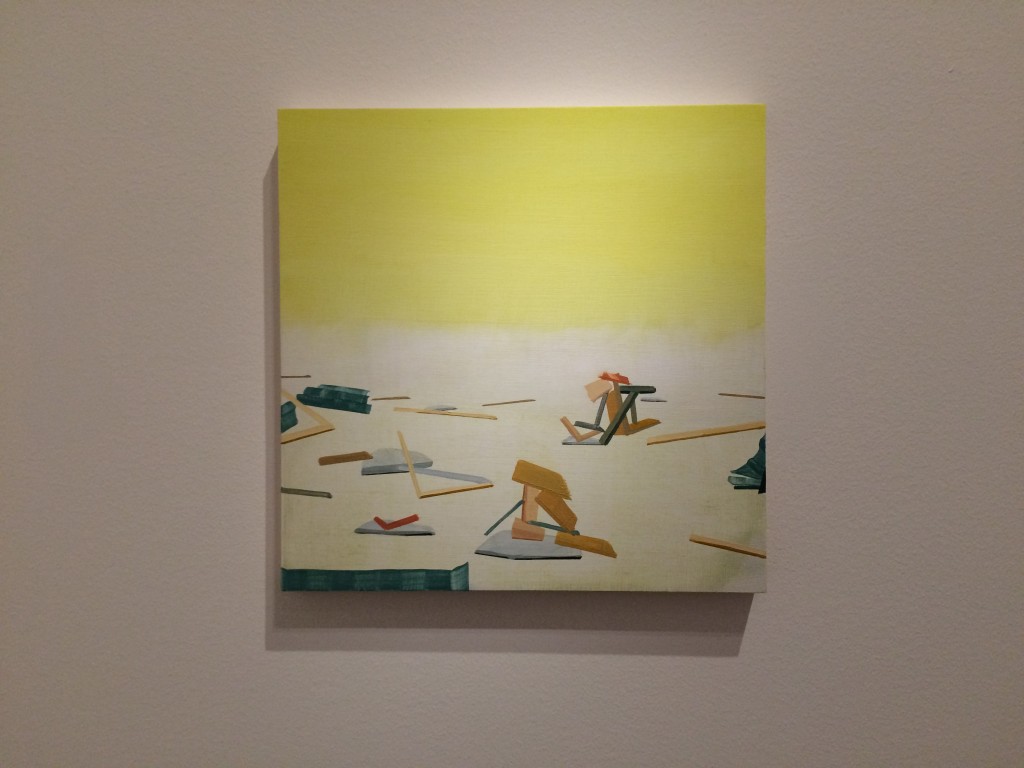 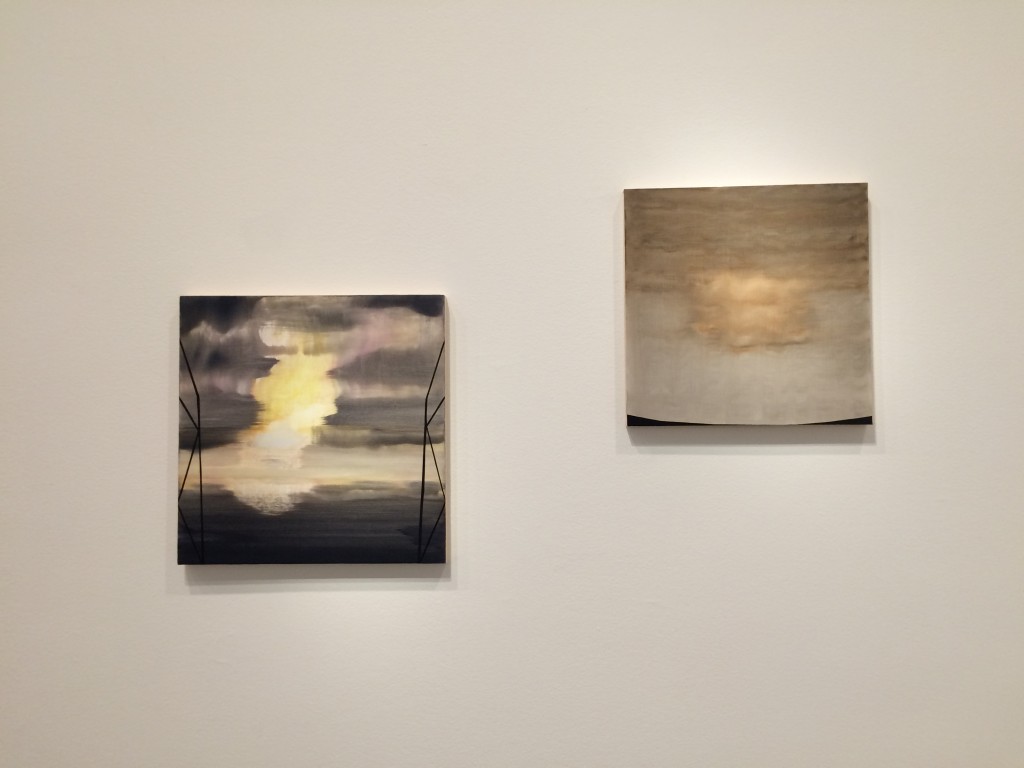 Magnolia Laurie, whose name you might recognize from my post a week or so ago, makes paintings of landscapes touched by human presence through the existence of strange constructions. This exhibition also features several of Magnolia’s sculptural elements in which her paintings are removed from the wall and instead displayed using simple wooden structures. I like her incorporation of these sculpture-paintings because it gives the viewer a new perspective on how to approach and contemplate her solemn, quiet works. 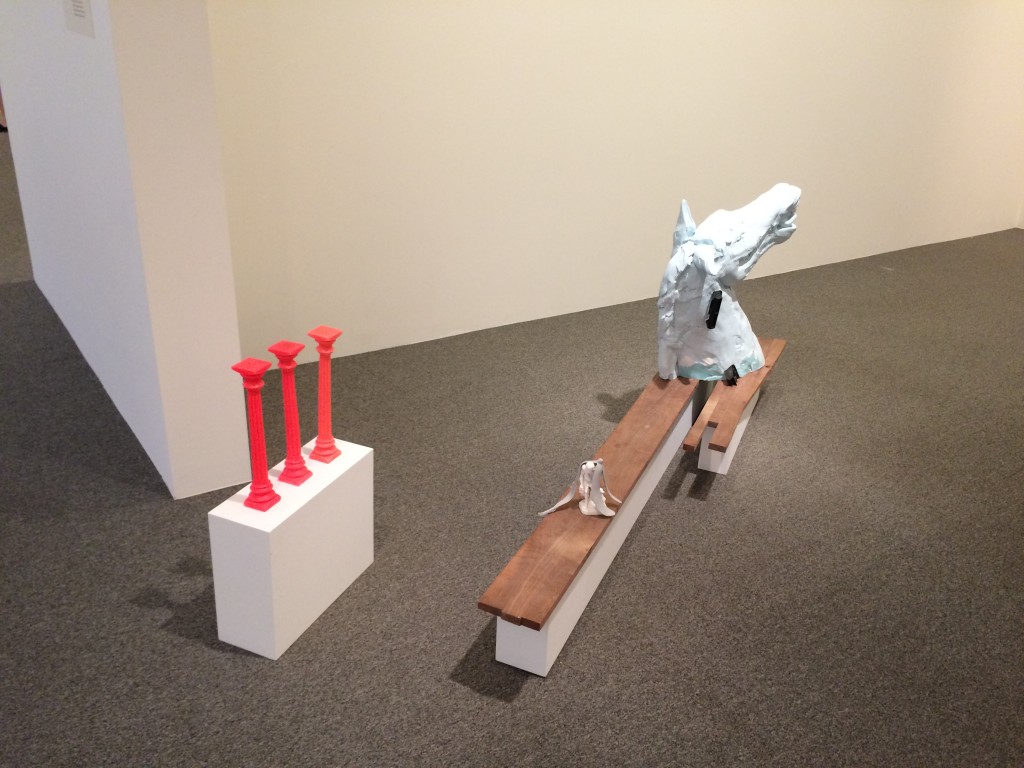 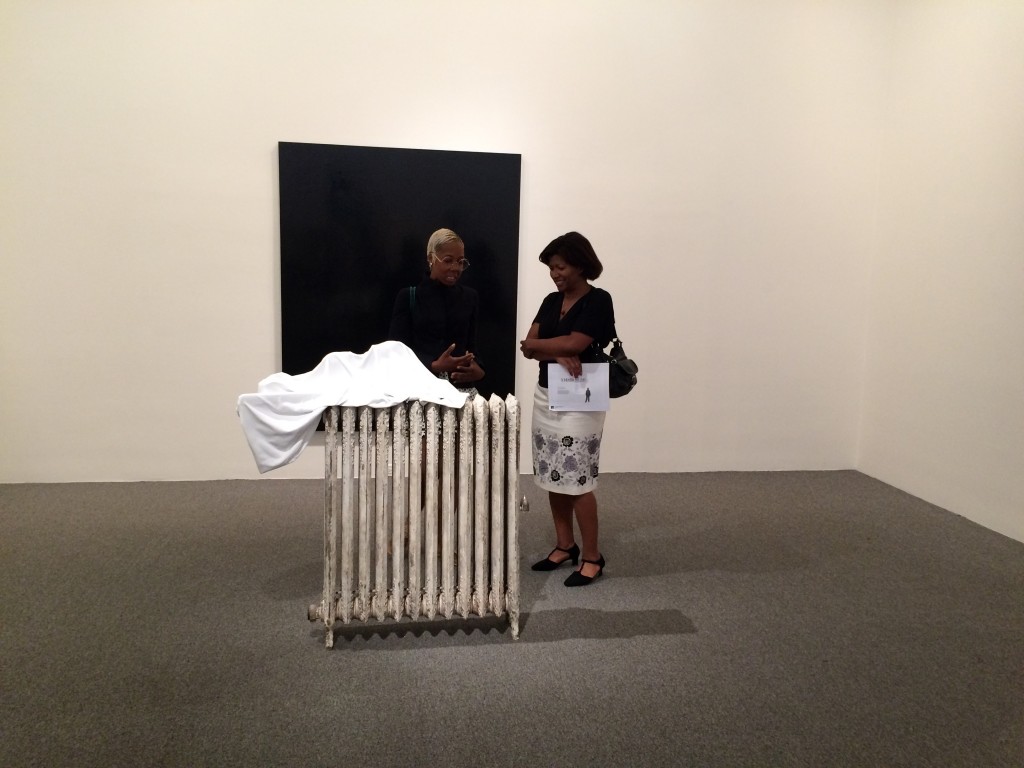 Jim Leach creates sculptural scenarios using found objects, appropriated imagery and pieces that he fabricates himself. The pieces are placed throughout the space, without clear definition as to where the artwork begins and ends, making the viewer part of the work. In some cases his arrangements are cultural allusions, such as in “Summer Vacation,” which points to Greek philosophy, but his installations at first appear disjointed and random. The interest created by giving the viewer a conceptual and spacial puzzle to solve keep viewers engaged in his work for more than just the typical minute or two. 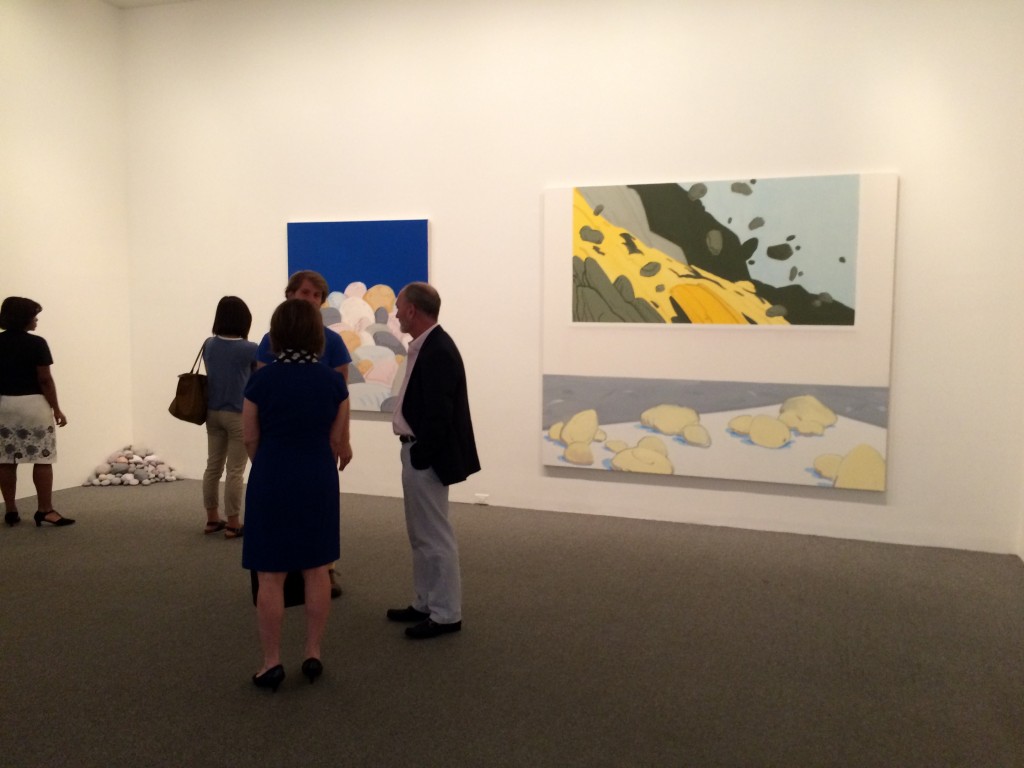 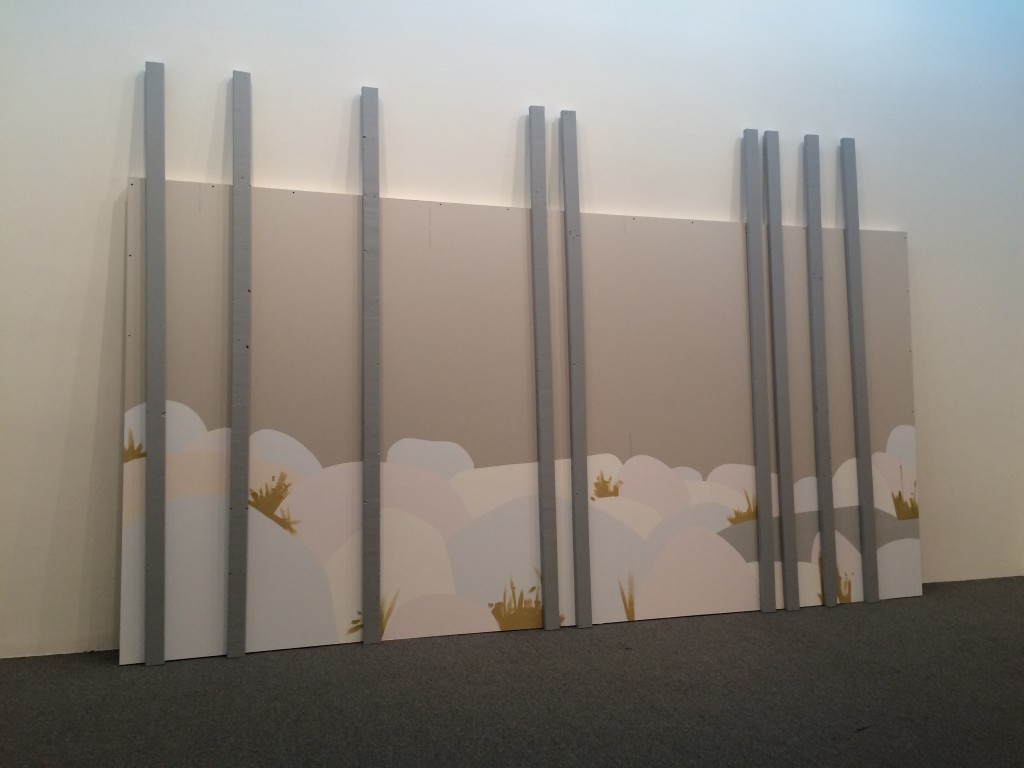 Upon entering Ryan Syrell’s space at the end of the exhibition, I felt as though I had jumped into a television and landed in a retro cartoon landscape. His work cleverly combines high and low-brow visual languages into paintings that are often spacially and coloristically jarring. I personally enjoy how his painterly, soft mark contrasts sharply with the strict, geometric shapes of his cartoon-inspired imagery. 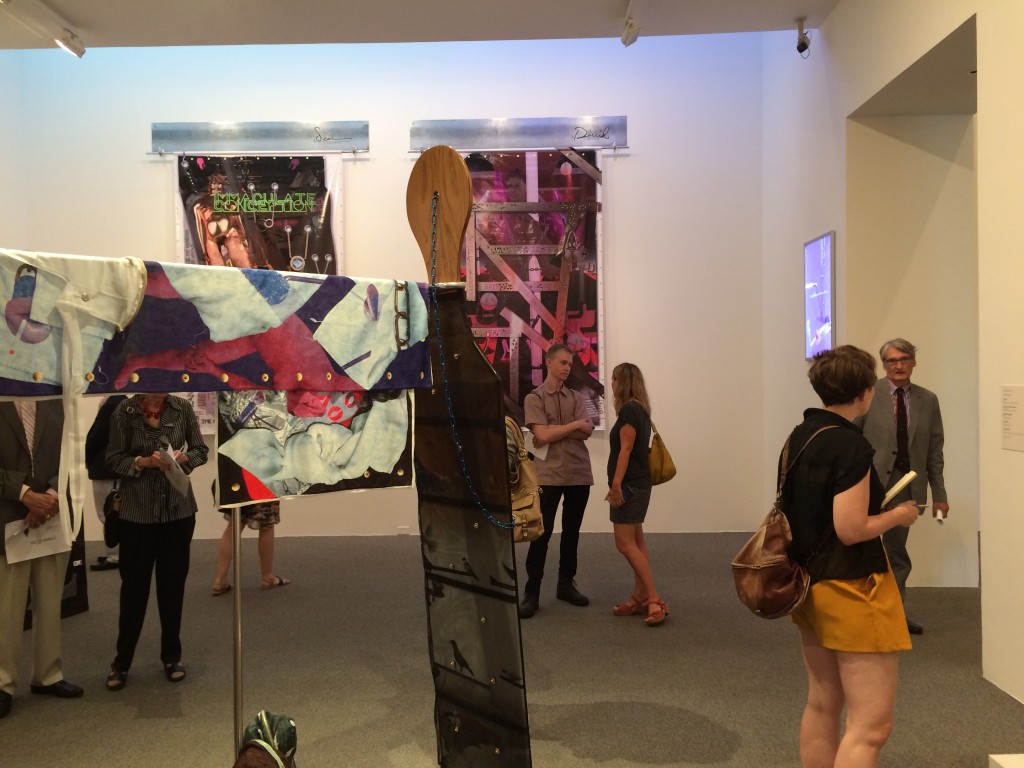 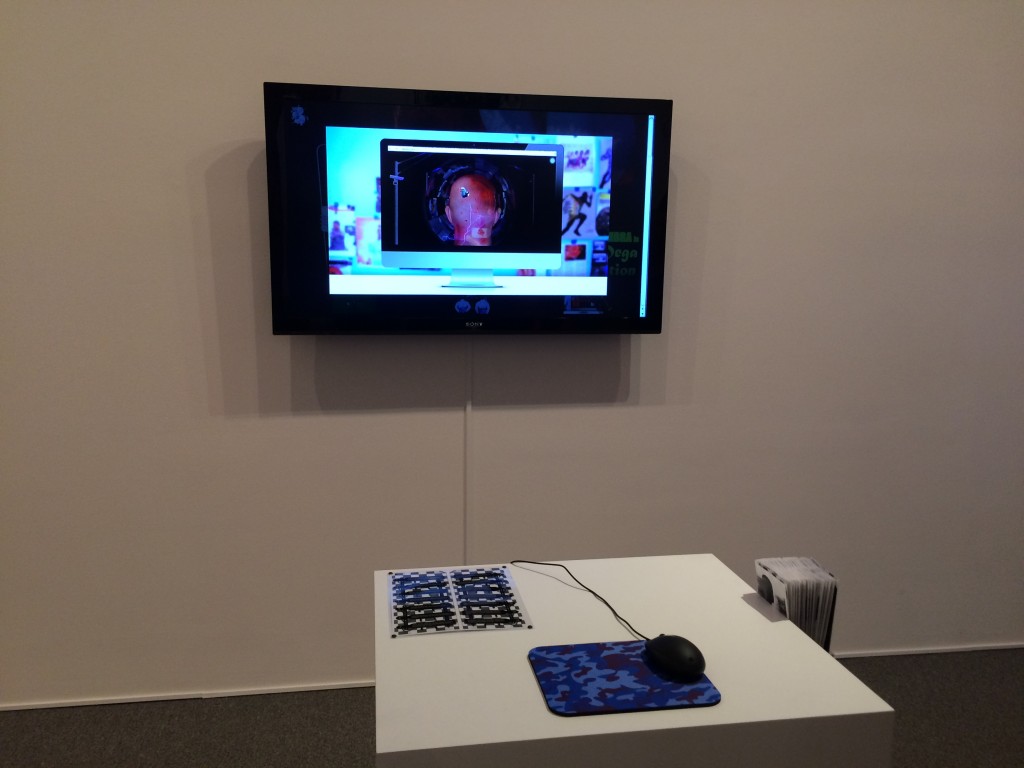 Finally, the dynamic duo Wickerham & Lomax have created a space that is visually overwhelming in the best of ways. Sampling a variety of sources from digital and analog media, Wickerham & Lomax make the viewer think about what is real and what is virtual in the contemporary world. They present these ideas in a massive array of media and in a variety of scales – from a towering installation of internet advertisements to an interactive video that may either be a video game or a piece of performance art – I’m not sure. In any case, I saw visitors really interacting with these pieces and having fun with Wickerham & Lomax’s work, which means that they reached their goal of creating a both immersive and provoking art experience. 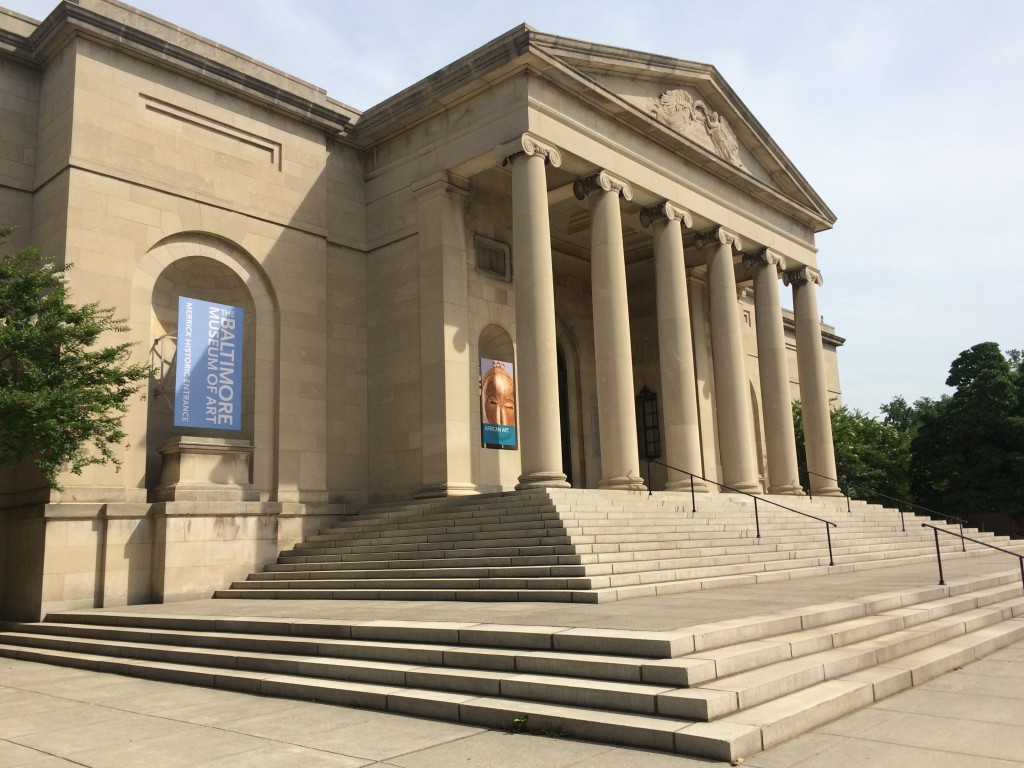 The Sondheim Artscape Prize Finalists Exhibition at the Baltimore Museum of Art is an enthralling show that got me truly excited about the art scene in Baltimore. It is definitely worth the trip to the BMA (which by the way, is free!) to check out.

For more information about the individual artists featured in this article, please click their names which link through to their personal portfolio websites.

For gallery hours and more information about what you can see at the Baltimore Museum of Art, please visit their homepage at: https://artbma.org/