Life Inside the Bromo Seltzer Tower 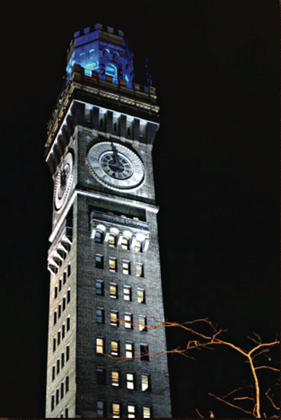 “Originally towers were built in medieval times as protection from the robbers and the bad guys. Citizens built retreats in these towers for safety. They were high enough so that no one could shoot arrows at them but they could shoot down. It gave them a sense of security against the weapons that were available at the time. That’s originally one of the major reasons for the towers we see in early Italian communities. The addition of the clock, which is unique, came later. The medieval castle kind of look was and is still intriguing to me.”

Life inside the Bromo Seltzer Tower

Some of society’s most passionate people inhabit the Bromo Seltzer Tower. Those people are our artists. David Ehlers is one among the select artists who rent studio space in the Bromo Tower. David is also a husband, a father, and a retired businessman. In fact, he was the advertising manager behind the Duracell battery brand. David’s life journey has provided him with a variety of experiences and has allowed him to travel to many places like Germany, Australia, and Italy. It is in Florence, Italy, where he saw the Palazzo Vecchio, the structure after which the Bromo Tower was modeled. When he was ready to stop traveling and pursue his interest in art he chose Baltimore. His first reason for his move was to be with his wife who lived here, and second, to attend MICA to study fine arts.

Charm City’s inner harbor and historical sites and buildings fascinated David because they fed his interest in history. When he graduated from MICA in 2008, he took an opportunity to tour the tower and then applied for studio space. Since then, he has been creating paintings, photography, and sculptures in his studio in the tower. His index of work includes: photos of the USS Constellation, The Lady Maryland, the inner frames and makings of the Bromo Tower, and paintings of the harbor, boats, and neighborhoods in Baltimore. David focuses on Baltimore’s rich history and loves exploring many of the historical sites Baltimore has to offer. David muses, “How do you focus on just one subject? I think you find it by limiting how much time you have and where you find your greatest enjoyment. And so, the tower lends itself to that.” The Bromo Tower is over 100 years old and, according to David, the history behind it is the most fascinating aspect of the tower. When you take a tour you’ll learn interesting facts, about Captain Isaac Emerson, founder of the Bromo Seltzer brand, and builder of the tower, requested that the face of the clock be one meter larger than the clock face on London’s Big Ben. It is a fascinating building and that makes it an impressive and wonderful space for artists’ studios. David explains, “The artists don’t suffer in here. There’s heat, a/c, electricity, security and good light. These are some of the many things the building just lends itself to so well. Visitors who live in the community tell me they have always desired to see the inside of the tower.”

The Bromo Tower offers its amenities to various types of artists. There are writers, photographers, digital artists, videographers, architects, fiber artists, and sculptors. The tower hosts events like open mic nights and presentations that involve projections and various performances. The tower allows its intimate spaces to be used for music performances, spoken word, teaching spaces, and more. David says, “When you are asked for directions you just tell them to ask where the clock tower is or the Bromo Seltzer Tower, and people are directed to 21 S. Eutaw Street, at the intersection of Lombard Street. It is also an ideal place to meet clients and to be noticed.” Even if art is not something of particular interest, there is so much history behind the tower. There is a museum room that has historical written pieces, photos, and products relative to the tower and the life of Captain Isaac Emerson. The amazing journey through the life of Emerson is a narrative worth anyone’s time. During a trip to the tower you can see a presentation on how Emerson grew up poor in Baltimore and went on to become a successful businessman with his own patent blue bottle for his product. You can even purchase one of the historic blue bottles to take home and be able to share the story with your friends and family.

Despite his experience being in the tower during the 2011 earthquake, David suggests we celebrate the tower renovations with fireworks. David can’t wait for the renovations to be complete. The tower will have its first cleaning in over 100 years and have a new face, and the clock will function again. Walking around Downtown Baltimore, one can always get a nice view of the clock tower. Though, as a photographer, David thinks the best views are by Camden Yards, walking down Lombard Street, or when you’re entering the city from Route 395. Once the renovations are done, David will create new works in and outside the clock. The Bromo Seltzer Tower will continue to inspire and intrigue Baltimore artists and citizens with its status as a national and city icon, its fascinating history, and the fact that it is a beautiful piece of architecture reminiscent of a medieval castle. David remarks, “Those who come [to the Bromo Tower] are very important. I think it’s a growing opportunity for a new artist because you have the chance to hear what people really have to say and what they understand art to be, and that’s always a big question.” As a guest, you don’t have to coordinate visiting hours with the artists to explore this world of art. Visitors are able to take the elevator or the stairs up to the top, and view artist studios and work on all levels. There are 15 floors in the Bromo Seltzer Tower and intriguing, thought-provoking art is exhibited on the walls in the common area, outside and inside each artist’s studio.  You can buy and take a piece of art home or you can just enjoy the walls of expression and inspiration.

To support the Bromo Seltzer Tower renovations follow the link for more information on how you can be a part of it all: http://promotionandarts.org/get-involved/donate 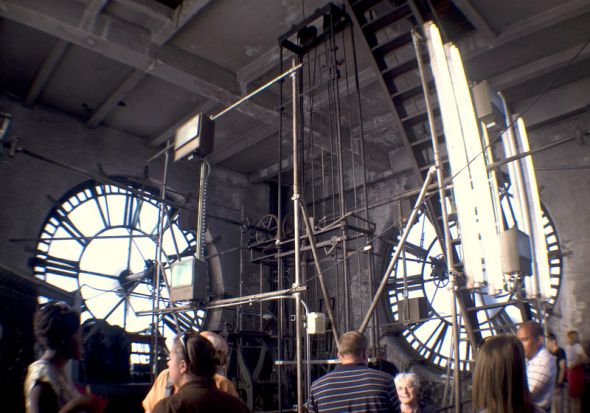 Photo by: Noelle Wigginton (https://www.baltimorebrew.com/2011/06/05/iconic-bromo-seltzer-tower-clocks-in-at-100/)
“People come here who are in their 60s and 70s and have said, ‘I have lived here all my life and I’ve always wanted to see the inside of the building.’ And it’s very nice to hear their stories. And to get inside of the clock, everyone gets a kick out of that. The clock itself is a national historic monument as is the Tower”