At the corner of Lombard and Gay streets in downtown Baltimore is the Baltimore Holocaust Memorial. Having driven by it many times, we decided to stop and investigate the installation and do a little research about this memorial. 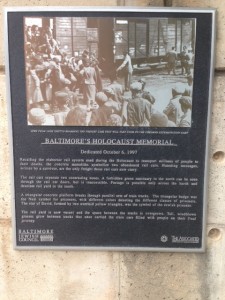 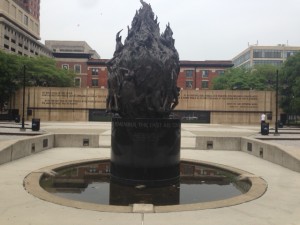 From the Monument City blog:

One of the more ominous spots in the city, the Holocaust Memorial sits just a few blocks north of the Aquarium and takes up an entire city block. In the 1970s a ninth grade Baltimore Hebrew class told their teacher, Alvin Fisher, they didn’t believe the Holocaust occurred. Mr. Fisher promptly took a proposal for a memorial to Charm City’s Jewish Counsel, hoping to erase the unfortunate misconception. They granted his wish and the site was chosen, an area downtown owned by the Baltimore City Community College. 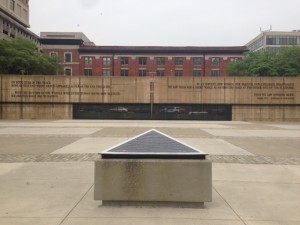 The memorial consists of a monolith resembling a train with a   steel gate symbolizing the internment of Jews in concentration camps. On the ground leading up to the large structure is a series of railroad tracks, tall grass growing from between the rails. At the southern end of the park a statue was erected, in 1988, that has since become the center-piece of the memorial. 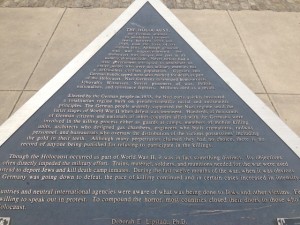 Two Baltimore businessmen and philanthropists, Melvin Berger and Jack Luskin, donated funds for the monumental flame. Dedicated in memory of the Night of Broken Glass, the 1938 destruction of Jewish homes, communities and synagogues by the Nazis, the sculpture is the creation of artist Joseph Sheppard and displays the bodies of victims engulfed in fire. Sheppard also sculpted the Pope John Paul II statue near the Basilica of the Assumption.

It was constructed in 1980 at a cost of $300,000 and consisted of a grassy mound and two 80 foot blocks of  concrete. The stark scene became a haven for the city’s homeless and a plan to re-design the area was presented in 1995. Architect Jonathan Fishman was commissioned to create the empty rail yard that exists today. A plaque, it’s inscription written by author Deborah Lipstadt, was dedicated in 1997 upon completion of the project. Several Holocaust survivors attended the ceremony. 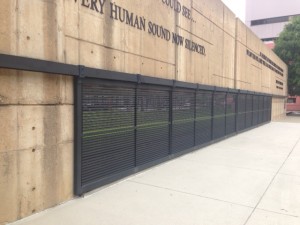 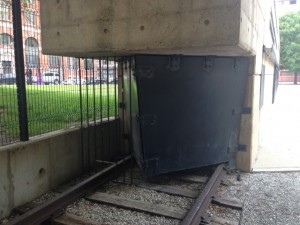 Posted in: Around Town, Public Art