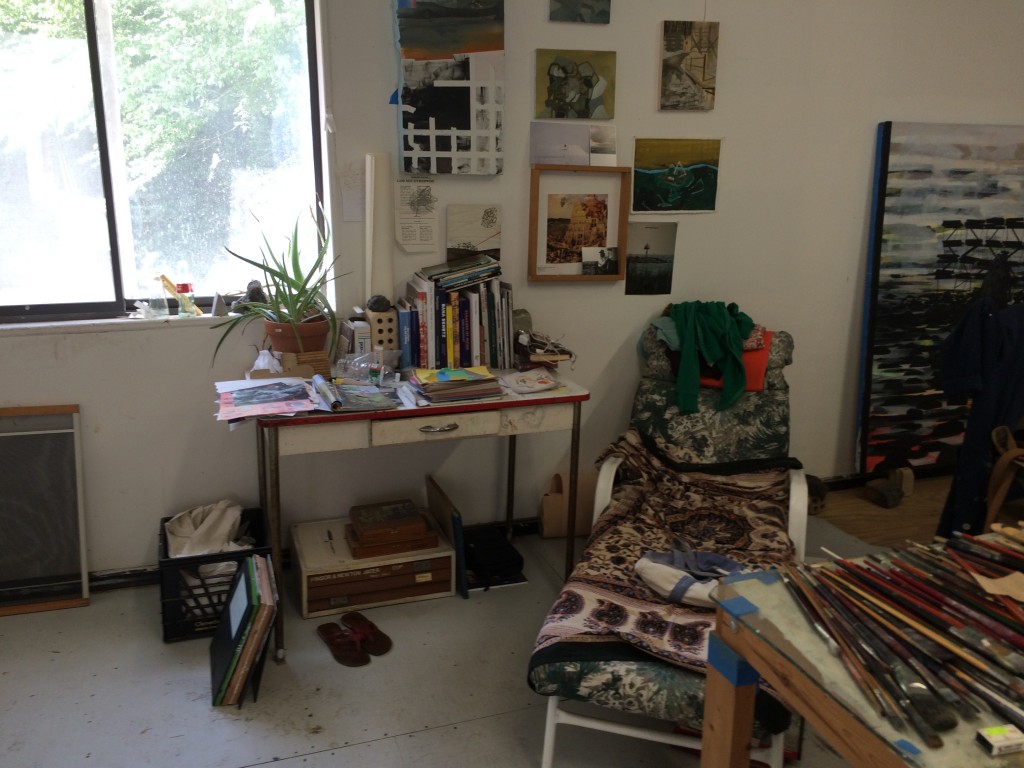 This past Friday, June 19th, I was lucky enough to visit Magnolia Laurie’s studio to talk to her about her work and her ideas. Magnolia is a Sondheim Artscape Prize Finalist this year, and her work can be seen in the upcoming finalists exhibition at the Baltimore Museum of Art, on view June 24th through August 9th, 2015. Speaking with Magnolia and seeing her workspace, I got a great sense of how she fits in with this year’s group of Sondheim Prize Finalists, an amazingly talented and diverse group of artists. To see more photos of her studio, her current projects, and to learn more about Magnolia, click through to read my thoughts on our brief interview.

END_OF_DOCUMENT_TOKEN_TO_BE_REPLACED 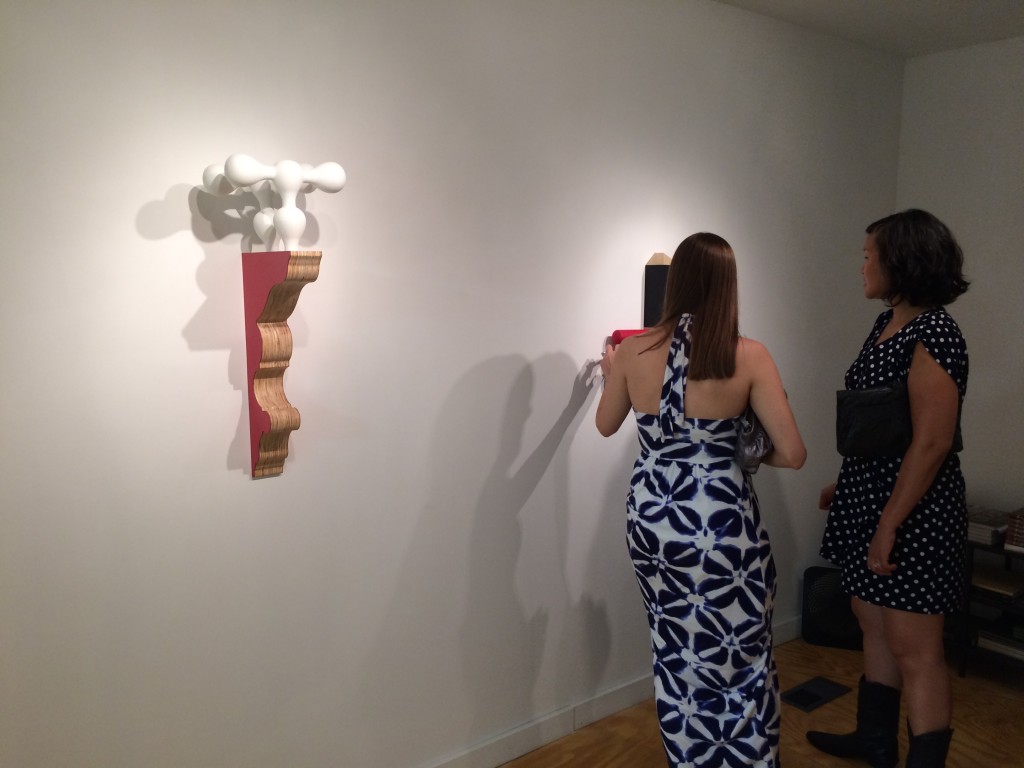 This Past Friday, June 12th, Artscape Gallery Network member Randall Scott Projects in West Baltimore hosted an opening reception for the exhibition titled “Palm Palm,” featuring the works of Charlie Roberts, Kyle Bauer and Karen Yasinsky. Arriving at the reception, I was quick to take photos while the gallery was still quiet, but it soon filled up, attracting a lively, bustling crowd. As the sun set, this indoor-outdoor exhibition was complimented by perfect summer weather, making for a truly lovely evening of beautiful artwork and engaging discussion. Although Charlie Roberts was not in town for the reception, I did have a chance to speak with both Baltimore-based artists Kyle Bauer and Karen Yasinsky about their works in this exhibition, and their lives as artists working in the Baltimore area. Click through for more photos and to read about my interviews with Kyle and Karen.

END_OF_DOCUMENT_TOKEN_TO_BE_REPLACED 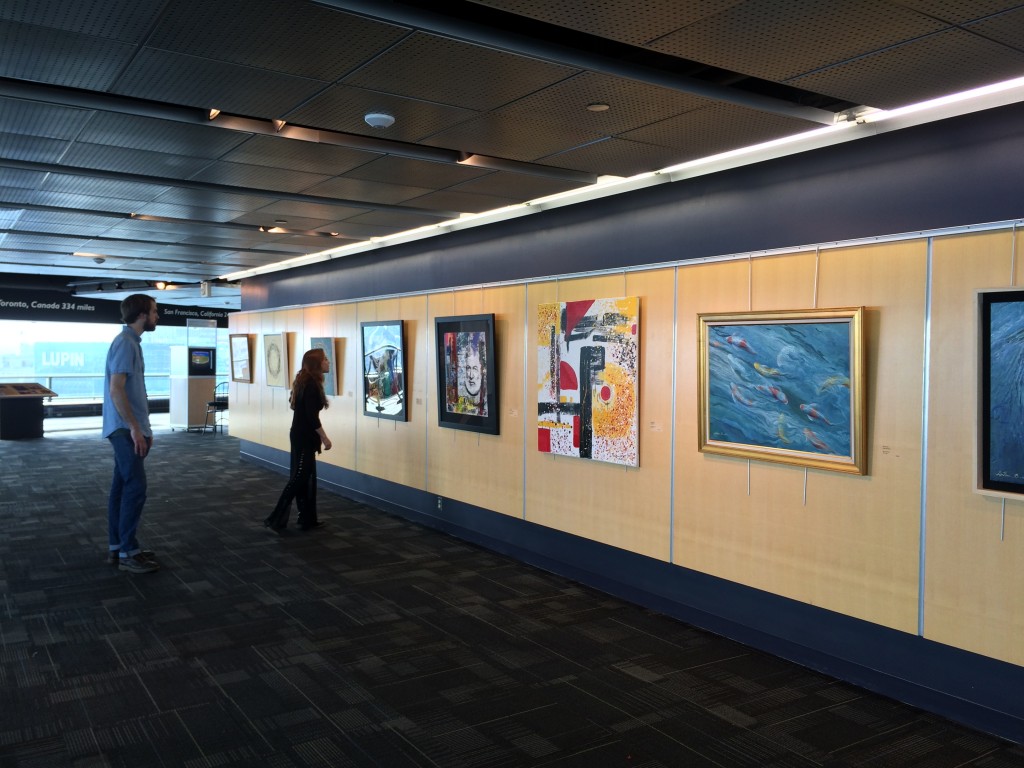 This past Friday, June 5th, as part of the Artscape Gallery Network, The Top of the World Observation Level at the World Trade Center Baltimore hosted a free opening reception for the new exhibition, “Shared Visions: Artists from the World Art Center,” co-curated by father-son duo Allyn Harris and Ed Harris. It was a beautiful afternoon in downtown Baltimore, so I decided to make the 10 minute trek from the BOPA office on East Baltimore street over to the World Trade Center after we closed up for the day. Click through to see more photos of the exhibition and read my brief interview with Ed Harris, co-curator and artist featured in this exhibition.
END_OF_DOCUMENT_TOKEN_TO_BE_REPLACED The Baltimore Office of Promotion & the Arts is seeking interested chalk/street artists and/or artist teams to submit proposals for an Artscape 3D chalk art project. Final project must be a maximum 15’ X 15’ and the subject matter must be water-themed, as “Water” is the theme for Artscape this year. The chosen artwork must be created on the Artscape site in two days and be available for photo opportunities during the weekend of Artscape, July 17 – 19, 2015. Please submit 10 examples of previous work and your costs.

Call for Artists: The Fred

The Fred Lazarus IV Artscape Prize (“The Fred”) is a competitive program that seeks to recognize and encourage artistic talent in Baltimore City.  Rising high school seniors apply for the prize which awards $1,000 to a Baltimore City school student artist.  The selected artist also receives a stipend to produce a solo exhibition in conjunction with the annual festival, with mentorship from the Baltimore Office of Promotion & The Arts.  The prize is named in honor of the Maryland Institute College of Arts’ long-serving president. 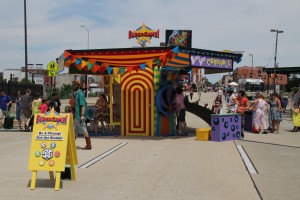 Artscape, America’s largest free arts festival, invites visual & performing artists to be a part of its 34th year!  In 2015, the festival’s “Dive In!” theme encourages projects both literally and/or conceptually using water as a creative element.  The Baltimore Office of Promotion & The Arts is accepting applications for the Artists’ Market, Artscape Gallery Network, “Ebb & Flow,” “Lazy River,” LOL @ Artscape, Sound Off Live!, opera, theatre, dance, classical music, and more.  Applications are available at www.artscape.org/applications.  The deadlines for submission and application fees vary.  Artscape takes place July 17 through July 19, 2015 along Mount Royal Avenue and North Charles Street.  Artscape is produced by the Baltimore Office of Promotion & The Arts.

In partnership with Open Space Baltimore, applications are being accepted for the Alternative Gallery Fair.  The pop-up fair is composed of artist run galleries and exhibition spaces displaying artwork, installations and performances by the artists they represent.  Emerging and innovative small, DIY, artist run and cooperatively managed art and exhibition venues from Baltimore and beyond are encouraged to apply.  The deadline for submissions is Monday, March 16 at noon.

Artscape and the American Visionary Art Museum host the annual Art Car Show & CARavan/Parade.  Commissions are available for the creation of new cars, bikes and other wheeled vehicles.  In keeping with the 2015 theme of water, entries with a sea creature, oceanic, ship-based or otherwise water-based theme will be prioritized in the selection of work.  The deadline for submissions is Friday, March 20.

The Emerging Artist Program provides an Artists’ Market space to a local up-and-coming artist at no cost.  Selected artists will be paired with mentors – established artists working in the same medium who will be available as a resource.  A limited number of scholarships are available for this competitive program.  Applicants must complete Artists’ Market application by Tuesday, March 31.

Nonprofit organizations that support the visual or performing arts in Baltimore and the surrounding region can apply for exhibition space at the festival.  Groups have the opportunity to reach thousands of festival-goers; therefore, they are encouraged to use the exhibit space as a marketing and promotional tool.  Eligible nonprofits include arts-related cultural institutions, cultural resources and educational institutions.  The deadline for submissions is Tuesday, March 31.

Supported by M&T Bank, the Artscape Gallery Network is an expansion of the Sondheim Artscape Prize.  The program features artists and art galleries throughout Baltimore City and County in an effort to raise the visibility of and attract more visitors to the region’s thriving arts community.  A highly-visible, multi-media marketing campaign accompanies the program.  The deadline for submissions is Friday, April 10.

Hosted in MICA’s Pinkard Gallery, “Ebb & Flow” is an indoor exhibition which includes artwork whose subject matter touches on this year’s Artscape theme, water.  Artists are encouraged to think broadly, both literally and abstractly in their interpretation of this theme.  Applications will be accepted that include already existing work and proposals for new work.  The deadline for submissions is Monday, March 30.

As part of the festival’s refocused food & beverage program, Artscape has five designated dining areas: The Art of Food Café, Baltimore BBQ, Food Truck Rally, Art of the Bay Café and Chesapeake Vendors.  In keeping with the theme of water, vendors with menus offering seafood are especially sought after.  The deadline for submissions is Sunday, March 15.

“The Fred” awards $1,000 to a high school student artist living in Baltimore City as well as a stipend to produce a solo exhibition, with mentorship from BOPA staff, to be on display at the 34th annual Artscape.  Applicants must be rising seniors at the time of application submission.  The deadline for submissions is Monday, March 31.

Gamescape showcases videogames and the creative people who make them.  Developers and designers are invited to promote their work through demos and panels.  The deadline for submissions is Friday, April 3.

For the second year, the Greater Baltimore Cultural Alliance (GBCA) hosts the Culture Tent at Artscape.  The tent is a place to experience and learn about the amazing breadth of arts & culture taking place in the Baltimore region.  GBCA member organizations interested in participating should contact Elena Kostakis at ekostakis@baltimoreculture.org.

“Harbor High Port (of Call) & Other Phenomenades” is a collection of sculptures, pop-up kiosks and participatory art installations exhibited during Artscape 2015.  Approximately ten installations and ten sculptures are featured along the Charles Street Bridge corridor.  In keeping with the water theme celebrated throughout this year’s festival, all installations reference Baltimore’s iconic Inner Harbor waterfront as if it were relocated via an imagined high tide to Charles Street.  Artists are encouraged to use any reference points from the harbor’s past, present and future.  The deadline for submissions is Monday, March 16.

Take a dip in the sea of exploration!  Kidscape invites Artscape’s youngest attendees and their families to let their imaginations flow with workshops, arts & crafts, hands-on experiences and live performances on the “Splashin’ Stage.”  Organizations and institutions interested in bringing water-themed ideas should contact Pooja Sampathi atpsampathi@promotionandarts.org.  The deadline for submissions is Monday, March 16.

Artscape 2015 includes approximately three large-scale outdoor performance and/or interactive artwork anchors.  Artists and artist collaborative groups working in both the visual and performing arts are encouraged to apply.  Projects should incorporate this year’s theme of water.  Proposals that both literally and/or conceptually include the theme of water are encouraged.  The deadline for submissions is Monday, March 30.

“Lazy River” consists of approximately 8-12 sculptures, installations and various rotating live performances.  Together, these aspects create a visually implied “lazy river” in an ode to this pillar of summertime nostalgia and family fun, as well as to the visual look of summer theme parks worldwide.  Festival-goers are able to experience these sculptures and installations as individual sights along the river’s edge, around the river-bend, through choppy, piranha‐infested waters, smooth sailing, and everything in between.  The deadline for submissions is Monday, March 2.

LOL@Artscape is Artscape’s funniest event!  The two-night performance highlights the area’s best up-and-coming comedic talents.  Selected comics will be expected to perform sets between 10 and 15 minutes.  The deadline for submissions is Friday, April 10.

Artscape accepts applications from business and organizations in the Bolton Hill, Midtown and Station North Arts & Entertainment districts that offer a unique experience for festival goers during the week of Artscape, July 13-19.  The deadline for submissions is Tuesday, March 31.

Artscape hosts a full schedule of dance, theatre, street theatre, pop-up performances, opera, classical and folk music as well as other creative performances.  Performers and performance groups should engage and entertain a broad spectrum of Artscape festival-goers while also developing new audiences.  Special attention is given to performances which incorporate the 2015 theme of water.  The deadline for submissions is Monday, March 30.

On Thursday, April 9 and Friday, April 10, local bands compete for one of Artscape’s limited time slots.  Sound Off Live! is held at Metro Gallery, 1700 North Charles Street.  All music genres are eligible. The deadline for submissions is Tuesday, March 17 by 4pm.