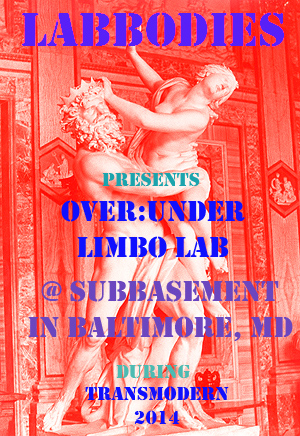 Labbodies Performance Laboratory is teaming up with Transmodern Festival and Subbasement Gallery to produce our most ambitious lab night yet, OVER UNDER LIMBO!

The Labbodies team will transform Subbasement Gallery into a cavernous entry/exit point to the shadowy world of Over Under Limbo, a mercurial world populated by national, regional and local Performance Artists for two nights only! We will incorporate both the Garden of Elysium, The River Styx and other nooks and crannies of the domain of Hades into our installation.

Over Under Limbo, is an exploration of the space in between the underworld and paradise (limbo). Hades, is the god of the underworld, but the underworld is not all dark and dreary. The story of Hades and Persephone is well known. But what would happen if Persephone took control? How would the story end if she had the power over her sexuality and the underworld were ruled by her?

To Apply:
Please email the following to Labbodies@gmail.com with the subject: LIMBO.. by SEPTEMBER 1st, 2014

About LabBodies: LABBODIES is a Performance Art Laboratory in Baltimore MD dedicated to showcasing artists who work-out in the arena of Performance Art*.