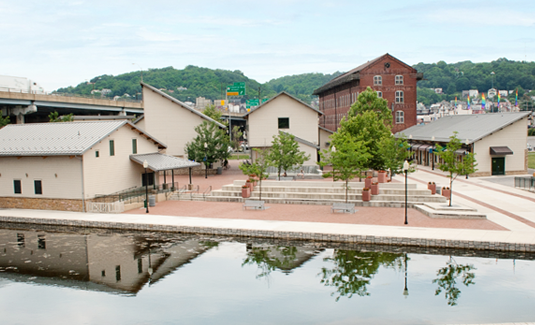 The Allegany Arts Council is seeking proposals for a mural on the wall along the bike trail behind the Cumberland Times News building at Canal Place. The mural must have a heritage-related theme.

The wall is about 250 feet long and 10 feet high, but the base of the wall tapers upward toward the Baltimore Street end to about 3 feet in depth (see photo and map).

The budget for the mural project is $10,000, which must include the cost of preparing the wall for a mural. The wall is in a state of disrepair and needs some patching and perhaps other treatment before it can be painted.

Proposals should include a plan for the whole wall, but artists are free to propose a multi-year phased plan, where the wall is covered in sections and the $10,000 completes one section. The maximum number of sections that will be considered is four, in which case the whole mural might be a eight year project and cost $40,000.

in order to be considered, a proposal must include:
1) a rough color concept sketch in the proportion of the wall
2) at least three high resolution photographs of the artist’s previous work (preferably mural art)
3) a written description of the project including a description of the concept, what will be done to prepare the wall for the mural, what medium will be used for the mural, how long the project will take, when the project could begin, and what community participation there would be.
4) a project budget detailing how the money will be allocated and on what schedule
5) two letters of recommendation (preferably from former clients)

The deadline for submitting proposals is October 1, 2015. All proposals must be digital. Proposals should be sent to the attention of Chris Sloan at csloan@alleganyarts.org.