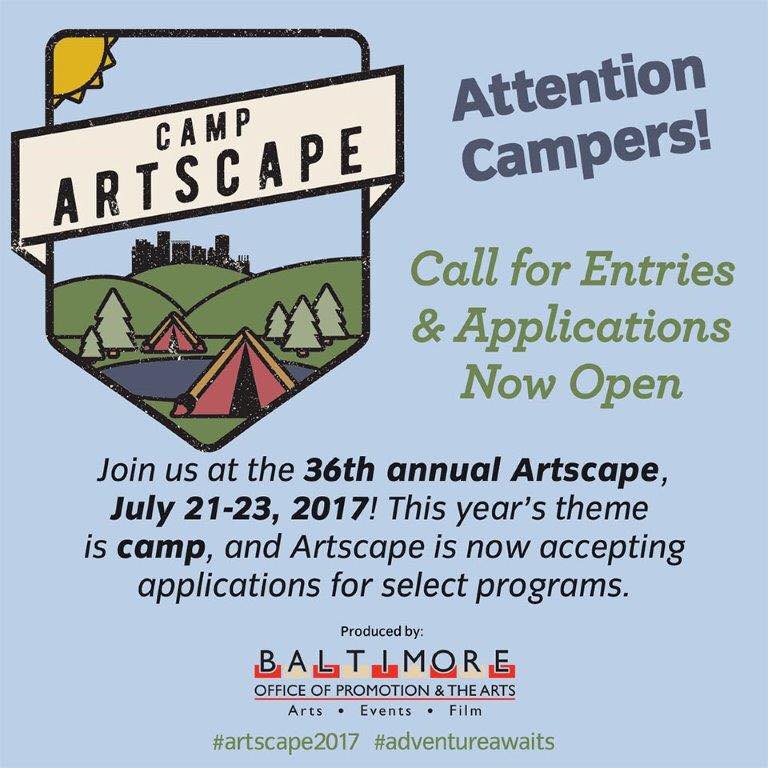 Have an idea for Camp Artscape? Interested in showcasing your take on an urban log cabin, faux campfire or artistic glamping? Do you want to create a large canoe sculpture or perform camp sing-alongs for festival-goers? Got a “campy” idea for showcasing Baltimore’s eclectic sensibilities? Artscape is welcoming ideas and encouraging artists to apply for its 36th year, July 21-23, 2017. The deadline for submitting a proposal for Artscape’s Anchor Projects and Charles Street Trail programs is Friday, February 24, 2017.  Program overviews and application details are below. A full list of available applications can be found on www.artscape.org/applications.

Artscape includes approximately four large-scale outdoor performance and/or interactive artwork anchors. Artists and artist collaborative groups working in both the visual and performing arts are encouraged to apply. Projects should incorporate this year’s theme of camp. Proposals that both literally and/or conceptually include the theme of camp are encouraged. The deadline for submissions is Friday, February 24, 2017.

Artscape includes approximately a dozen installations and/or sculptures to be featured along the Charles Street Bridge corridor. Artists and artist collaborative groups working in both the visual and performing arts are encouraged to apply. The festival’s theme of camp/camping should be considered broadly, and creatively incorporated into proposed projects. Proposals that both literally and/or conceptually include the theme of camp are encouraged. The deadline for submissions is Friday, February 24, 2017.

Attracting more than 350,000 festival-goers annually, Artscape features a full schedule of performing arts including live concerts from national, regional and local acts on multiple outdoor stages; professional dance troupes and a wide variety of opera, theater, street theatre and classical music performances.  Additionally, the festival showcases visual artists from the Baltimore region and beyond through an artists’ market, outdoor & indoor exhibitions, prize programs and more.  Admission is free. Artscape is produced by the Baltimore Office of Promotion & The Arts on behalf of the Baltimore Festival of the Arts, Inc.