The museum exhibition of Sondheim Finalists will be hosted at The Walters from June 17 – August 13, 2017 with free admission for all visitors. Besides the Saturday, July 15, award ceremony and reception, the museum is planning to host a series of artist talks with the finalists that will be open to the public. Additionally, BmoreArt and Area 405 will curate an Artscape Gallery Network exhibition to recognize the past 70 Sondheim Finalists with a reception on June 30th. 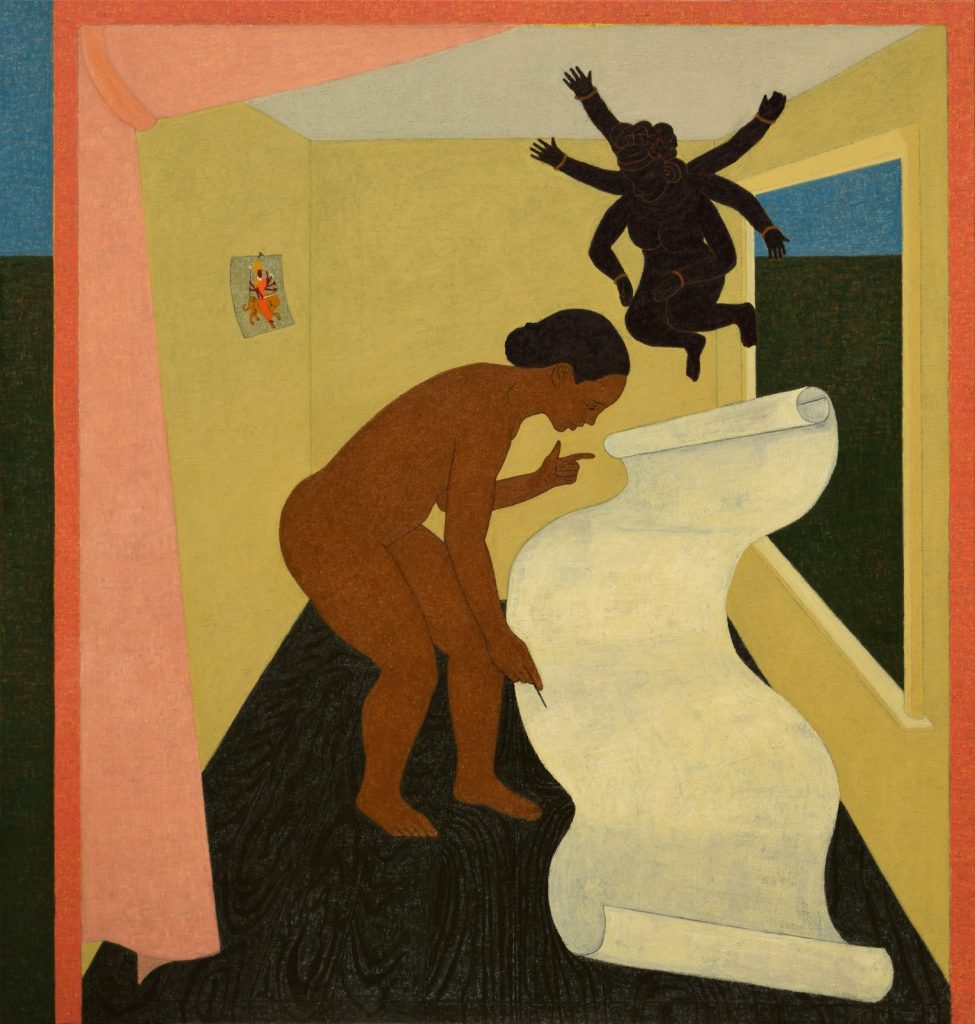 Ahuja has participated in artist-in-residence programs at The Museum of Fine Arts, Houston (Houston, TX) , the Maryland Institute College of Art (Baltimore, MD), the Studio Museum in Harlem (New York, NY), the Siena Art Institute (Siena, Italy) and at the Dora Maar House (Menerbes, France). Mequitta’s work has appeared in the publication Modern Painters, and in 2010, she was featured in ArtNews as “An Artist to Watch.” Ahuja received her Masters of Fine Art from the University of Illinois in 2003, and her Bachelors of Art from Hampshire College in 1998. Ahuja was a finalist for the Janet & Walter Sondheim Artscape Prize in 2015. 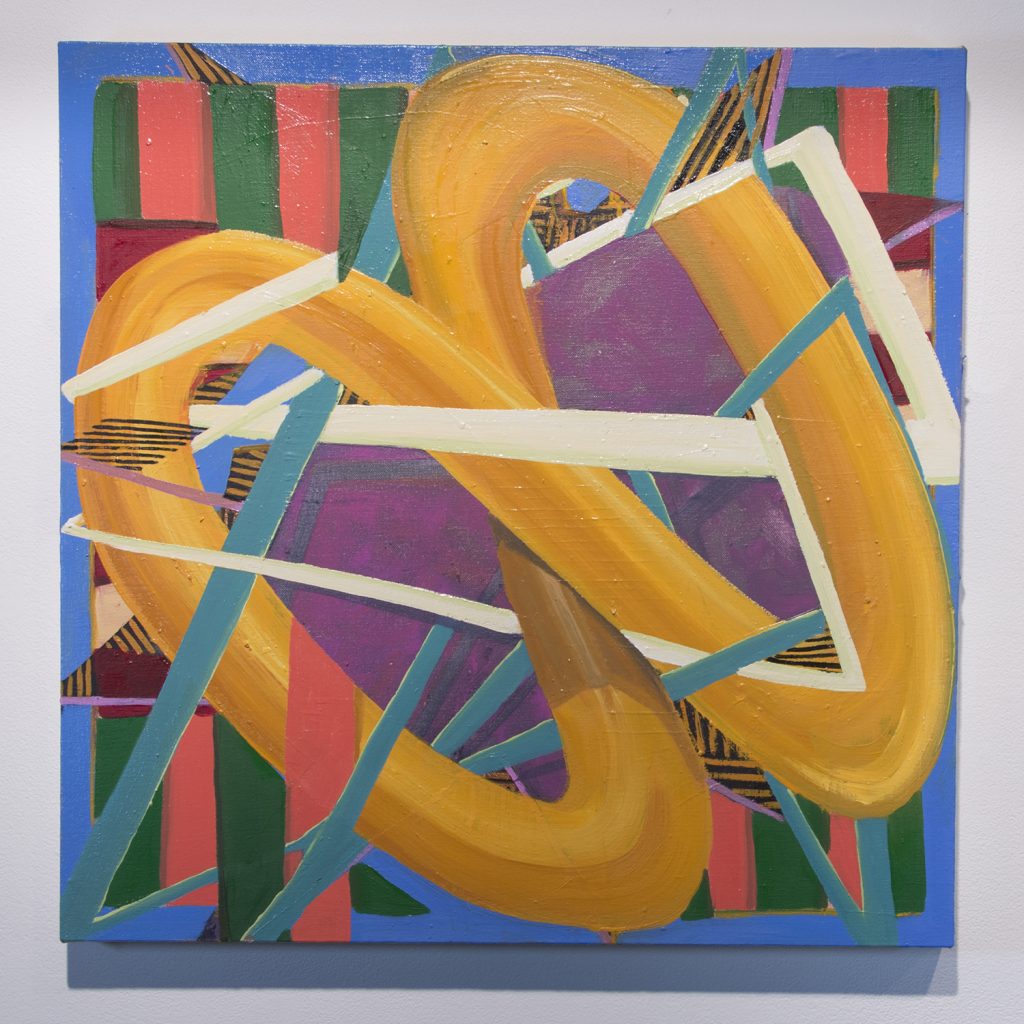 She has completed residencies at the Wassaic Project (Anemia, New York), Vermont Studio Center (Johnson, VT) and Woodstock Byrdcliffe Guild (Woodstock, NY). Arntzen teaches at the Maryland Institute College of Art, George Washington University, and the Community College of Baltimore County. She is also a member of the Institute of Contemporary Art Baltimore advisory board, and in 2016 she was awarded the Maryland State Arts Council’s Individual Artist Award in painting. 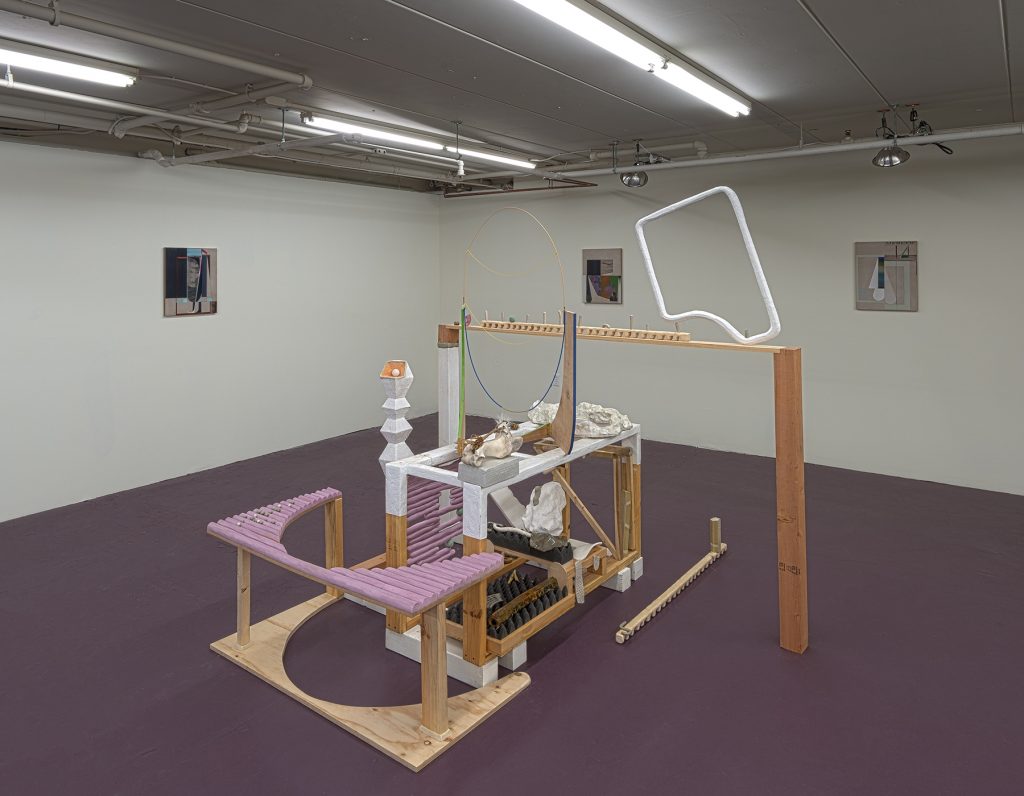 Cindy Cheng (Baltimore, MD) creates complex constructions and installations that investigate the relationship between drawings and objects and are incubators for history, memory and reflections on the physical and abstract self. Her work has been featured in group and solo exhibitions at St. Charles Projects (Baltimore, MD, 2016), ‘sindikit (in collaboration with Cheeny Celebrado-Royer) (Baltimore, MD, 2016), Present Junction (Toronto, Canada, 2015), Thomas H. and Mary K. Williams Gallery at Mount Saint Mary’s University (Emmitsburg, MD, 2016), Flashpoint (Washington, DC, 2014), E-merge Art Fair (Washington, DC, 2013) and has an upcoming solo show at Ditch Projects (Portland, OR, 2017).

Cheng received her BA from Mount Holyoke College. Cheng received a Post-Baccalaureate Certificate from the Maryland Institute College of Art (MICA) in 2008 and then earned her Masters of Fine Art from MICA’s Mount Royal School of Art in 2011. She is currently teaching at MICA in the Drawing Department, and has been a resident at the Vermont Studio Center (Johnson, VT) and at the Anderson Ranch Artist Residency (Snowmass Village, CO). In 2016, Cheng and was a finalist for the Trawick Prize and in 2013 a semifinalist for the Janet & Walter Sondheim Artscape Prize. 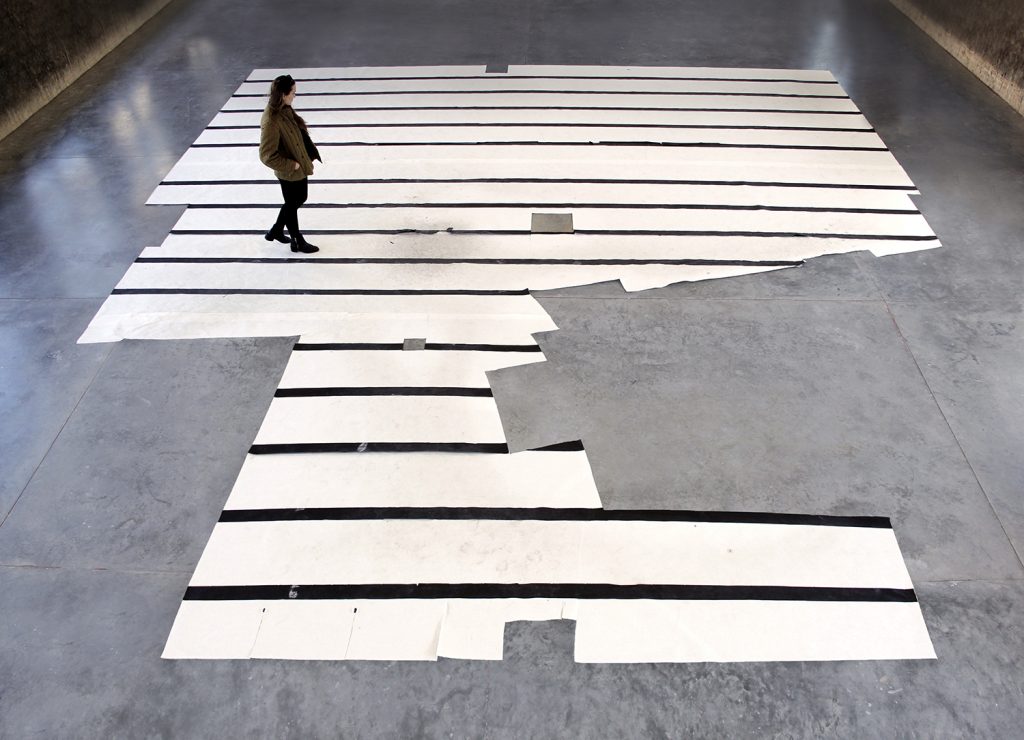 Sara Dittrich (Baltimore, MD) is an interdisciplinary artist creating objects, installations, and performances that investigate and amplify the dynamic rhythms of the body, and the interconnected patterns that reside in everyday life. Dittrich received her Bachelors of Fine Art in interdisciplinary sculpture from the Maryland Institute College of Art in 2014, and has exhibited her work in numerous exhibitions including solo shows at the Washington Project for the Arts (Washington, DC, 2017) and the Urban Institute for Contemporary Arts (Grand Rapids, MI, 2015).

Dittrich has also exhibited her work internationally at KIV Gallery (Prague, Czech Republic, 2014) while studying sculpture at the Academy of Arts, Architecture and Design in Prague. In 2013, Dittrich was awarded the Beers Contemporary Award for Emerging Art and has completed residencies at Sculpture Space (Utica, NY), Vermont Studio Center (Johnson, VT), and the Bemis Center for Contemporary Arts (Omaha, NE). 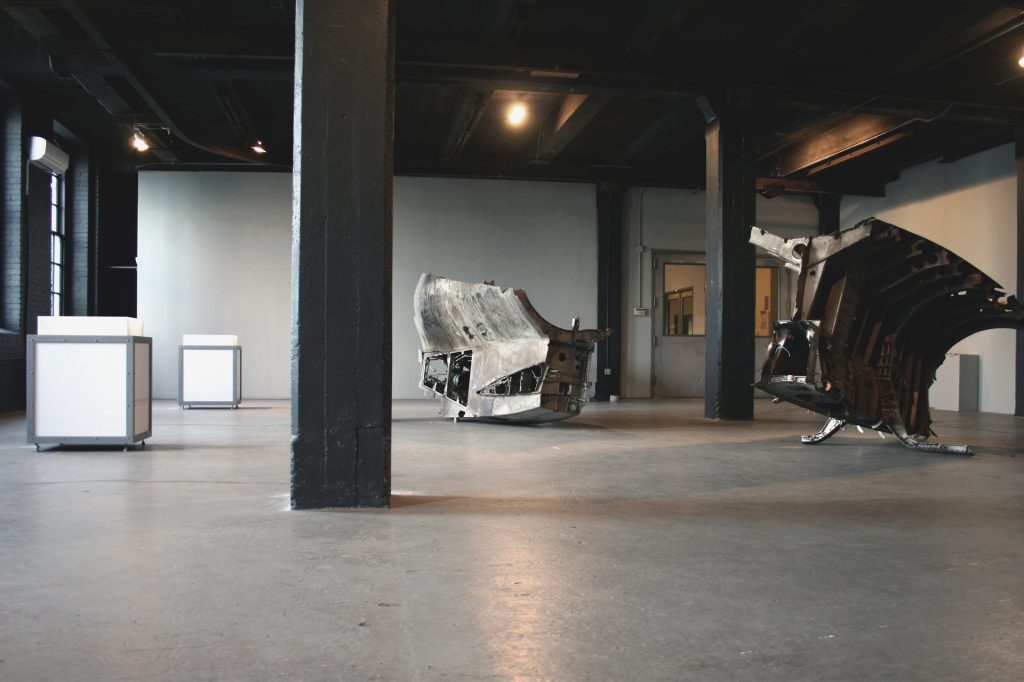 Benjamin Kelley (Baltimore, MD), is a 2010 Masters of Fine Art graduate of the Rinehart School of Sculpture at the Maryland Institute College of Art. Driven by the smell of oak, the cult of commodity, and the elegance of precision, Kelley re-contextualizes found objects with altered and fabricated structures. His works have been exhibited locally and nationally, including solo exhibitions in the Icebox Project Space at Crane Arts (a project of the Institute of Contemporary Art Baltimore) (Philadelphia, PA, 2016), CONNERSMITH, (Washington, DC, 2013), Open Space (Baltimore, MD, 2011), Patti and Rusty Rueff Gallery at Purdue University  (West Lafayette, IN, 2009), among others. 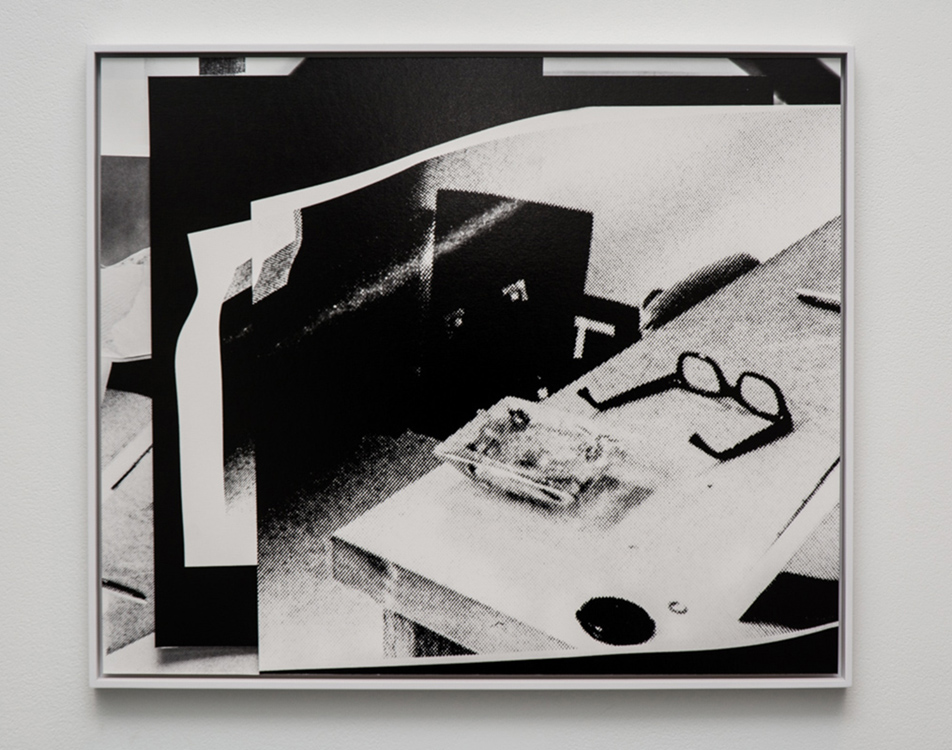 Kyle Tata (Baltimore, MD) is a native of Baltimore City and a 2012 Bachelors of Fine Arts graduate of the Maryland Institute College of Art. His work primarily uses photography, printmaking, and artist books to explore the themes of history, design and architecture. Tata has an extensive local and regional exhibition history, including exhibitions at the Hamiltonian Gallery (Washington, DC, 2016, 2015), Area 405 (Baltimore, MD 2016), Spudnik Press & Gallery (Chicago, IL, 2014), Silvermine Arts Center (New Canaan, CT, 2014), Current Space (Baltimore, MD, 2013), the International Print Center (New York, NY, 2013), Furthermore Gallery (Washington, DC, 2013) and Philadelphia Photo Arts Center (Philadelphia, PA, 2013). His artist books are held in the collections of the Los Angeles County Museum of Art (Los Angeles, CA), The International Center for Photography (New York, NY) and the Indie Photobook Library (Washington, DC). Tata is currently in the fellowship program at the Hamiltonian Gallery, and since 2013, has been an arts instructor at the Baltimore School for the Arts. In 2014, Tata was also a finalist for the Janet & Walter Sondheim Artscape Prize. 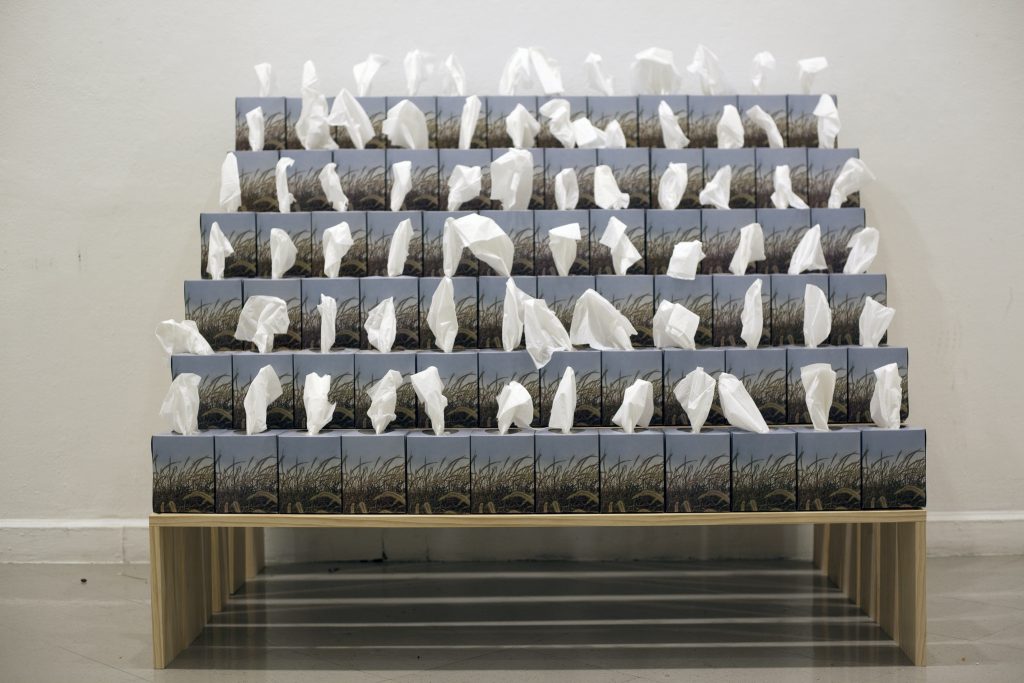 Amy Marisa Yee (Baltimore, MD), explores the intersection of popular culture, simulacra, and professional sports through her work in 3D installation, photography, and video. She is a 2015 Masters of Fine Art graduate of the Maryland Institute College of Art’s Rinehart School of Sculpture, where she was the recipient of the Amalie Rothschild Award, and a 2011 Bachelors of Art graduate of Smith College.

Ruba Katrib is a curator at the Sculpture Center in Long Island City, New York, where she is responsible for organizing exhibitions, educational and public programs, publications, and for coordinating all aspects of program presentation. At the SculptureCenter she has produced the group exhibitions The Eccentrics (2015), Puddle, Pothole, Portal (2014) (co-curated with artist Camille Henrot), Better Homes (2013), and A Disagreeable Object (2012); and exhibitions with solo artists Rochelle Goldberg (2016), Anthea Hamilton, Gabriel Sierra, Magali Reus, Michael E. Smith, and Erika Verzutti (all 2015). Recently, she has also co-curated Visitors (2015) with Tom Eccles, a group exhibition of public art on Governors Island, New York. In her previous post as the associate curator at the Museum of Contemporary Art (MOCA), North Miami, Florida, she organized several solo and group exhibitions including Dark Continents (2008) and The Reach of Realism (2009), which explored the traditions of realism within the digital age, as well as the first museum retrospectives of Cory Arcangel and Claire Fontaine (both 2010). Katrib has contributed texts for a number of publications and periodicals including Art in America, Parkett, and cura. magazine. Katrib received her BFA from the School of the Art Institute of Chicago, where as an undergraduate in 2003 she co-founded the Chicago based non-profit arts group Threewalls. She received her Master’s degree in Curatorial Studies from Bard College in 2007.

Clifford Owens is a New York-based contemporary artist who works in multiple media: performance, photography, text and video. His work, often combining more than one of these media, serves to challenge expectations of race and gender, time and space, power and permission, performer and spectator. His recent solo exhibitions include Hard & Fast, INVISIBLE-EXPORTS, New York (2016); Clifford Owens: Selections from Anthology, Yerba Buena Center for the Arts, San Francisco, California (2015); A Forum for Performance Art, Brooklyn Academy of Music, Brooklyn, New York (2014); Five Nights’ Worth, Performa 13, New York, New York (2013) and Clifford Owens: Anthology, MoMA PS1, Long Island City, New York (2012). Owens has performed or has also been included in dozens of group exhibitions nationally and internationally, including those recently at the Walter Art Center, Minneapolis, Minnesota (2014); The Studio Museum in Harlem, New York, New York (2014, 2013, 2012); Contemporary Arts Museum Houston, Houston, Texas (2013, 2012, 2011) and the Museum of Modern Art, New York, New York (2011). Owens’ work is included in the permanent collections of the Museum of Modern Art and The Studio Museum in Harlem. He has been awarded the William H. Johnson Prize (2012) and the Louis Comfort Tiffany Award (2007), and has been an artist-in-residence at the Skowhegan School of Painting and Sculpture, Skowhegan, Maine (2004); as well as a visiting artist at dozens of universities throughout the country. Owens was born and raised in Baltimore, Maryland; he received his BFA from the School of the Art Institute of Chicago in 1998 and his MFA from Rutgers University in 2000.

Nat Trotman, Curator, Performance and Media, joined the curatorial department at the Solomon R. Guggenheim Museum in 2001, working on the blockbuster exhibition Matthew Barney: The Cremaster Cycle. Since this triumph, he has curated several other large scale exhibitions for the Guggenheim campuses, including the exhibition currently on display, Lenka Clayton and Jon Rubin: . . . circle through New York, Peter Fischli David Weiss: How to Work Better, co-curated with Nancy Spector and shown in New York (2016), James Turrell, co-curated with Carmen Giménez and shown in New York (2013), Pawel Althamer: Almech, shown in Berlin (2012), Found in Translation, shown in New York and Berlin (2011, 2012), Haunted: Contemporary Photography/Video/Performance, co-curated with Jennifer Blessing and shown in New York and Bilbao (2010, 2011), and Catherine Opie: American Photographer, as assistant curator with Jennifer Blessing and shown in New York (2009). He has also developed performative and site-specific projects for the Solomon R. Guggenheim Museum rotunda in New York in collaboration with artists such as Susan Philipsz (2010), Tino Sehgal (2010), Sharon Hayes (2009), Meredith Monk (2009), and Francesco Vezzoli (2007), among others. He is also charged with helping develop the Guggenheim’s collection of photography, video, and film, and is closely involved in the museum’s performance programming. In addition to catalogue essays for several of the above mentioned exhibitions, Trotman has published on Matthew Barney and Joseph Beuys, Jane and Louise Wilson, among many others. Trotman holds an M.Phil. from the Graduate Center of the City University of New York, where he focused on performance, photography, and time-based art, and is a graduate of the Whitney Museum’s Independent Study Program.