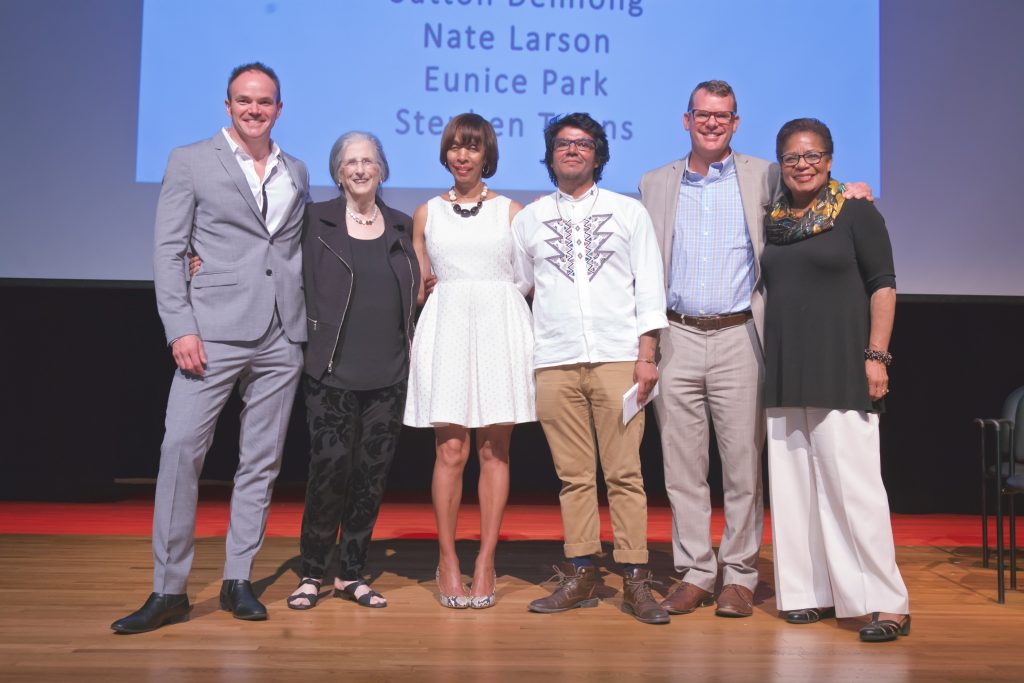 The Baltimore Office of Promotion & The Arts (BOPA) is proud to announce that Erick Antonio Benitez is the winner of the 2018 Janet & Walter Sondheim Artscape Prize. The coveted $25,000 prize was presented at The Baltimore Museum of Art on Saturday, July 14. The five other finalists—Nakeya Brown, Sutton Demlong, Nate Larson, Eunice Park, and Stephen Towns—will receive a $2,500 honorarium established by M&T Bank in partnership with BOPA. Works of art by the winner and finalists are on view at the BMA through Sunday, August 5.

Esta Tierra Es Tu Tierra (This Land Is Your Land) is an immersive installation focusing on the U.S.-Mexico border and its effects on human lives. In winter 2015 and summer 2016, Erick Antonio Benitez (American, b. 1988) traveled the entirety of the border that stretches from the Gulf of Mexico to the Pacific Ocean, visiting numerous sites including migrant shelters (in both the U.S. and Mexico), a Tent City jail recently closed for its horrific human rights violations, and various border landscapes. His poetic and sonic video documentary captures onsite interviews with border agents, migrants, and members of the volunteer Minuteman Project, as well as interactions at Friendship Park, where residents of the U.S. and Mexico are permitted to meet face-to-face across a 100-foot, semitransparent span of fencing. Benitez also made audio recordings and photographs and collected sand, dirt, rocks, seashells, yucca flowers, and discarded personal belongings. He preserves and enshrines these objects within the installation as ritual offerings to those who have lost their lives on their journey to the United States.

The Janet & Walter Sondheim Artscape Prize exhibition is held in conjunction with Artscape and is produced by the Baltimore Office of Promotion & The Arts. It is one of the summer’s most highly anticipated exhibitions, designed to assist visual artists in the Greater Baltimore region in furthering their careers by allowing them to pursue tracks in their work that may not otherwise be possible. The artists were selected by an independent panel of jurors, who reviewed the exhibition and interviewed each artist to decide the winner. Image Credit: Mitro Hood, The Baltimore Museum of Art

This year’s jurors are: Lauren Cornell, Director of the Graduate Program and Chief Curator at the Center for Curatorial Studies at Bard College and Hessel Museum of Art; Margot Norton, Curator at the New Museum, New York; and Kameelah Janan Rasheed, a Brooklyn-based interdisciplinary artist, writer, and former public high school teacher.

The prize is held in conjunction with the 37th annual Artscape, America’s largest free arts festival taking place Friday, July 20 through Sunday, July 22, 2018 along Mount Royal Avenue and North Charles Street. Additionally, an exhibition of the semifinalists’ work is shown in the Decker and Meyerhoff galleries of the Maryland Institute College of Art on Friday, July 20 through Sunday, August 5, 2018. An opening reception for the semifinalist exhibition takes place Thursday, July 19, 2018 from 6pm to 9pm at MICA, located at 1301 W. Mount Royal Avenue.

Special thanks to M&T Bank for their annual support of the program, which includes the finalists’ honorarium.