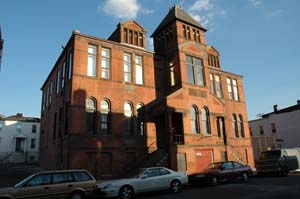 For over 30 years, School 33 Art Center has been the bridge between contemporary artists and the viewing public.  Through our exhibitions, studios for artists, classes for adults and children and special events and workshops, we work to insure a vibrant future for contemporary art and artists in Baltimore. A new eco-friendly outdoor garden fed by a rainwater collection system, and renovated gallery spaces are examples of School 33 Art Center’s commitment to improve inside and out. Our goal is to remain an engaging and relevant community art center, by showcasing and sustaining emerging and established artists, and training budding artists from Baltimore and beyond, well into the future.

School 33 Art Center was established in 1979 as a neighborhood art center for contemporary art in the South Baltimore area of Baltimore City. Formally known as P.S. 33, the architecturally engaging brick and brownstone building built in 1890, was utilized as an elementary school until 1975 when a new facility was built for neighborhood children a few blocks away. The South Baltimore Community Committee requested that Mayor Donald Schaefer revitalize the vacant and vandalized building.  Based on the success of Long Island City’s P.S. 1 in New York and the strong national presence of alternative space programs in the late seventies, Mayor Schaefer proposed a similar program for Baltimore, thus creating School 33 Art Center.

As this building represented a significant component of Baltimore’s architectural heritage, its renovation exemplified the City’s belief in the revitalization of unused urban resources. The renovations were made possible with federal funds from the United States Department of Commerce, Economic Development Administration and through the City’s Public Works Improvement Program.

After an extensive two-year restoration to allow for the creation of adequate gallery, studio and classroom space, School 33 opened its doors in July 1979, becoming Baltimore’s original alternative space for contemporary art. Its program offerings included one gallery exhibition space, studio facilities for professional artists, and classrooms for ceramics and printmaking workshops.

In addition its studio program and services for artists, School 33 has expanded its exhibition, educational and special events programming. Highlights over the past 21 years include eighteen annual exhibitions in three gallery spaces; an extensive outreach program to South Baltimore neighborhood city schools; and the creation of the annual Open Studio Tour. These augmented programs were developed as a direct response to needs expressed by the public and art community.